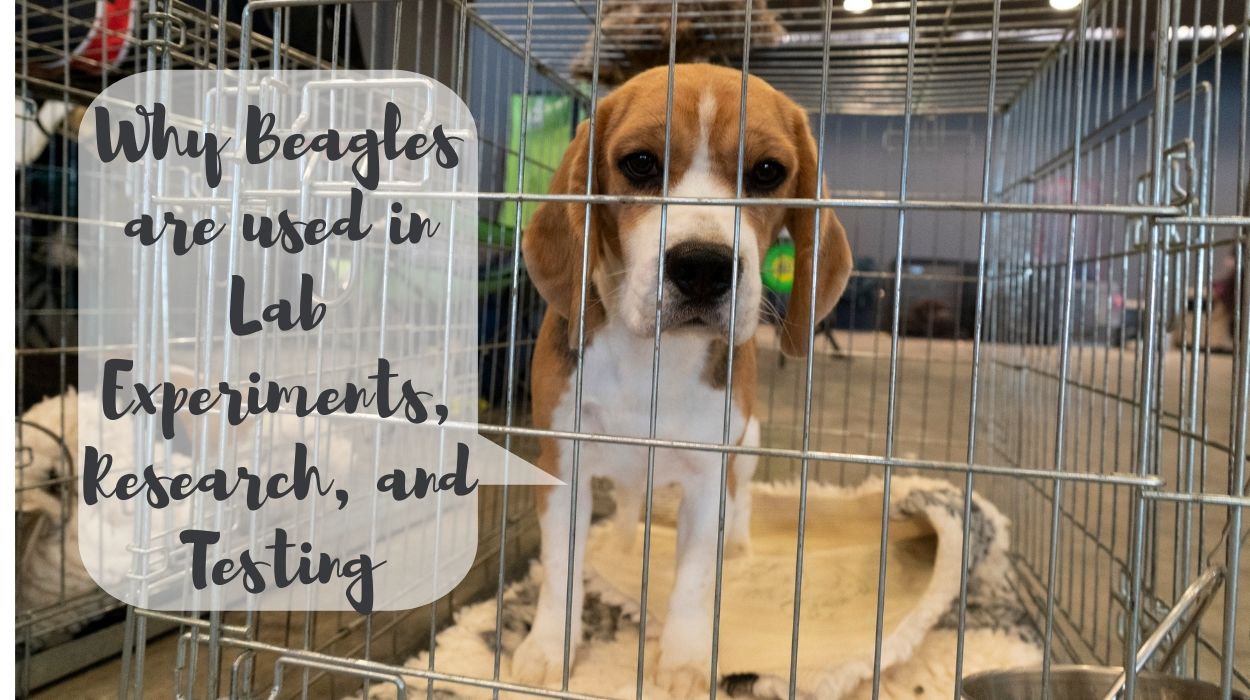 Out of the 65,000 dogs that are experimented in the labs annually, 96% of them are beagles, reports dogtime.com.

There is an abundance of dogs in the world but do you wonder why is it that the Beagles are highly targeted?

Beagles have some of the best characteristics that make them people-friendly dogs. Yet, these are the very characteristics why they are prone to be tested and experimented in labs and used in research studies.

In this article, you will learn why research labs use Beagles for testing, how they are tested and for what, and the result of these tests on these lovable dogs.

Research labs use Beagles primarily for their size and personality. They are of the apt size and do not take up much kennel space. Less kennel space means less money to spend. Besides, they have short hair, meaning less shedding. Other than these major reasons, their personality traits make them ideal lab animals.

Let’s now take a look at it.

Beagles are a convenient bread as they have unconditional trust in humans. They are affectionate, kind, and loving. With an easy-going manner, it is easier for the researchers to conduct experiments.

They are also known to be forgiving and are less prone to bite humans.

According to the American Kennel Club, the level of adaptability is 4 out of 5 which makes them easy to handle. Moreover, these are self-willed dogs, a trait common with humans.

These animals are docile, which is another major reason why beagles are used for testing. They display submissive behaviour and are easy to manipulate. Having a compliant nature, it is not a difficult task for the researchers to make them their own “lab rats”. The American Kennel Club has given a 3 out of 5 rating for the level of openness to strangers, making them more susceptible to purposes of experimentation.

Female Beagles experience fewer complications during pregnancy. Once scientists figured out their easy nature, they started breeding the dogs specifically for experimentation and test purposes.

Since they are bred on purpose, they have “inbred colonies” to obtain completely consistent results. Therefore, they can be considered genetically “pure”.

Where do they get Beagles from?

Purpose breeding by companies or sellers is a common act when labs want to obtain Beagles. At just 1-year old, they can be sold to research institutes.

Moreover, they are manipulated genetically to make them suitable study vessels of human disease. In addition to this, they can also be bred to be pathogen-free.

There are two types of dealers:

Class A Dealers only sell to labs and the beagles are bred specifically for that purpose. They have a license to breed and raise these dogs for further experimentations in labs.

These are funded by medical universities. A while ago, they were also funded by the government but the National Institutes of Health, US, banned such fundings and made it illegal. Not only that but beagles are also collected and bought from different breeders, from pounds and even from shelters, a process which is called “pound seizure”.

Author’s Note: Class B Dealers are known to have several violation disputes with the AWA, the Animal Welfare Act.

Both the dealers provide a special service called devocalization.

Devocalization is the process of surgically removing a significant amount of tissue from their vocal chord to permanently reduce the volume of their bark. Such corporate abuse is done to make it so that researchers are not distracted by the sounds.

Large doses of substances like pesticides, chemicals, new medications, detergents, and cosmetics are tested. This is called a toxicology test done for commercial purposes. Radiation is also injected into their system. Scientists conduct cardiovascular and pulmonary studies as well.

Young and healthy dogs are made to go through intrusive medical procedures in Terminal Surgery Labs. Ranging from kidney transplants, coronary bypass surgeries, pacemaker implants, and testing prosthetic devices, Beagles undergo crude methods. Their organs are removed as their heart, brain, and prostate are easily accessible for cancer studies.

Author’s Note: The labs experimenting with beagles deemed the process “painless” and failed to mention that dogs were killed due to such procedures.

To study the effect of drugs, various tests are conducted as part of the drug approval process. Vaccinations and drugs are first tested on these animals before they go for human trials. To avoid failed experiments and cause untoward harm to humans, to study and control the unforeseen side effects, beagles are persistently force-fed and pumped with pharma drug injections that eventually act as slow poison.

As the human population grows so does their need for things. A steady increase in household products is seen almost every year. But these products, before being made available to the public, are tested on Beagles.

Tests are conducted on patches of skin, drugs are added to their food or water supply to study the ill effects of these products.

What Testing Does To Beagles

Apart from the obvious symptoms like trauma, such relentless experimentation and isolation can have adverse effects on the mind of a Beagle:

After a long duration of pain and suffering at the hands of humans, they are taken in by rescue shelters. The following video shows the inhospitable environment that the dogs are kept in.

The compliant and affectionate nature of these dogs which is a cause for people to have them in their family and among children (beagles and children get along very well) is twisted to be the same reason for using them for tests in labs.

This need to exact constant sacrifice by the animals to achieve scientific purposes is barbaric. Intrusive procedures, harsh testings, and purpose breeding just to spend their short existence in extreme pain and suffering is not a consensual act. It is cruel to sacrifice them for the future betterment of human life.

The endgame here is to ban all animal testing when modern means of alternative are present and can be developed further.