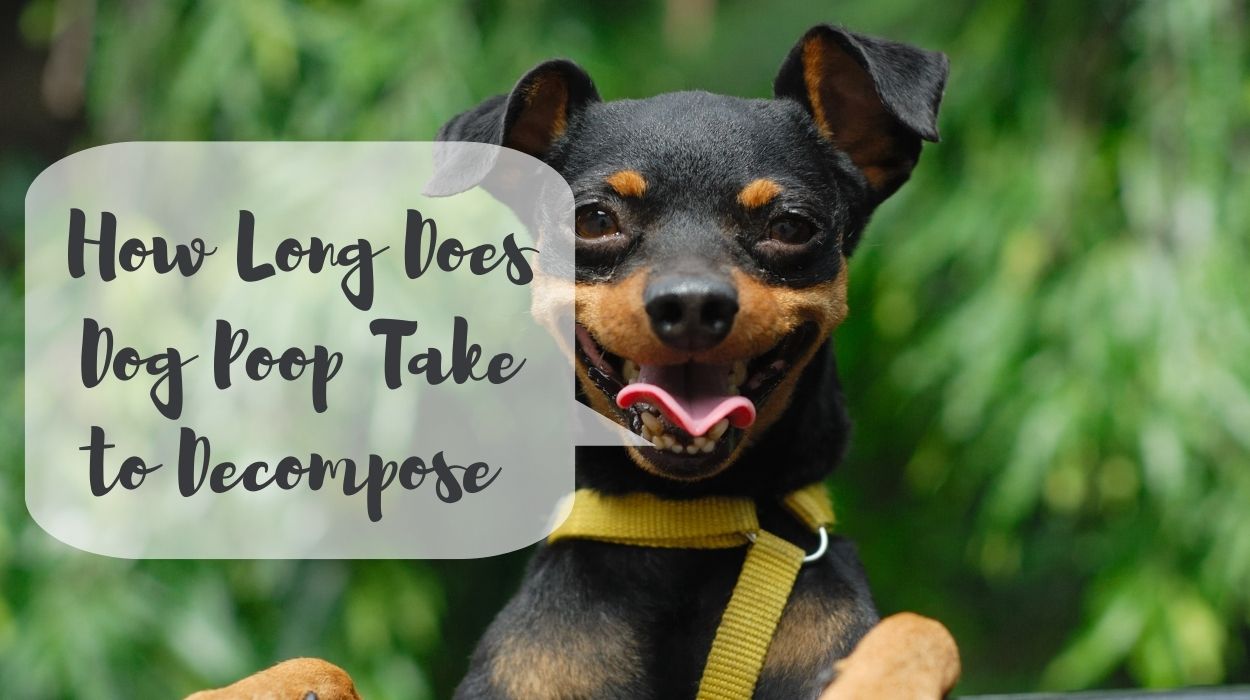 If you found your way to this article, you must be pretty bothered with this question. Maybe it’s the poop sitting in your background, under the sky all day long, and you wonder how long it will take till it’s not there anymore.

As a matter of fact, you may even be concerned about letting it stay there in the first place and think if it needs to be removed or not. The good news for you is, I’m here. I’ll cover the decomposition of a dog’s poop and whether it’s okay to let it stay on your lawn.

Decomposition is a natural way for a dog’s poop to be broken down into smaller bits and eventually enter the soil (if it is on one).

If you’re wondering about the time it takes for a dog’s poop to decompose, let it be known that the whole process depends upon the diet your dog has and climate.

Canine poop can fully decompose within nine weeks but can even be fully depleted after a year. A significant factor in the process of decomposition of dog poop is climate.

How long does dog poop take to decompose?

So, what amount of time does a dog’s poop take to decompose? It’s not quick; I can tell you that much, at least. It will take you around two months to witness a dog’s droppings decompose entirely.

Here’s a more detailed breakdown of what goes down after a dog decides it is time to take a dump.

The first week isn’t too dramatic or extraordinary. In fact, the poop will remain how it was as long as its appearance is concerned. There is one change, however, albeit not a very healthy one.

The poop, by this time, can contain millions of harmful pathogens, which aren’t good for the health of the environment. To give you a ratio, a few simple grams of poop can have around 20 million pathogens by the first week, such as Giardia.

The second and third weeks are the beginning stages of decomposition. In this time, the remaining poop will have a much darker color than it initially had. Bacteria settling in during the first week will become more hazardous than ever now.

Any animal or human that comes in direct contact with the poop in the second week has a high chance of getting sick.

The third week is more interesting to learn about since there is a good appearance of the poop (besides the color change in week 2). In the third week, molds can be visible on and inside the poop. Feces have a moist attribute that helps the mold thrive and grow quickly.

By this point, bacteria on the poop are working their way and can transport through the soil, air, or groundwater. Rainstorms can assist these pathogens in transporting either to a garden or even a storm drain.

The poop will start breaking down into smaller pieces by the eighth week and have white molds all over it. The ninth week is when you’ll see that the poop has simply vanished from the area it was in.

If you take a better look (from a safe distance, of course), you can notice that the grass near the feces will have died. This is because of a surplus of nitrogen commonly found in dog poop.

The poop may be gone by the ninth week, but not the harmful bacteria. They can still very well be lying around the same area.

Does dog poop cause any diseases?

As mentioned above, if anyone comes in direct contact with dog poop after the second week, it can be harmful to health. Mainly poop which has been left unattended for four weeks, contains more harmful bacteria than ever.

A single touch from your hand to your mouth can prove to be good enough to invite parasites into your body.

Humans aren’t the only ones in danger with decomposing poop, and even animals are prone to the same parasites and conditions. Not only are these parasites coming from an unclean background, but they also feed on your intestines.

You read that correctly; if a dog’s poop has eggs in it, it will lead to forming parasitic larvae, which can munch on your intestines for months or, even worse, years!

What is the most environmentally friendly way to dispose of dog poo?

Now that you understand how dog feces can cause various diseases and must not be left to decompose, let’s look at some ways to dispose of dog poop in an eco-friendly manner.

There are different ways you can do this, and we’ll go over the best ways you can keep the environment healthy while also getting rid of a dog’s poop.

Again, I’ll remind you that it’s best if you clean up any dog poop lying in your backyard or garden within a week unless you want to invite harmful bacteria and a bad smell.

If you’re looking for the most environmentally friendly option, get poop bags that are vegetable-based and compostable. However, I would highly recommend you research these biodegradable products well before buying.

Generally, such bags are not cheap, so most people opt for regular plastic bags, but that does not help dispose of them correctly. This is because many products showcase they are 100% biodegradable but genuinely are not.

Composting the dog feces is also a good option, but unfortunately, it is not available in all countries. Some people use it to compose it in their backyards, but it could go wrong as it requires precision.

So, if your local authorities have a dog waste management system, then you will undoubtedly find a compostable green bin where you can simply dispose of the dog poop with a compostable bag.

Dissolve the feces with a digester

Another effective way to dispose of dog feces is to dissolve the poop with a digester simply. There are several digester products in the market, or you can choose to make your own at home too.

You will find guides for the same; in short, anything works as long as the feces gets disintegrated in soil.

Subsequently, you can also choose to bury the poop, but it has to be done right. Dig up the hole upto six inches and dispose of the feces. It’s quite critical to dig a deep hole to keep it away from other dogs or animals’ reach, bacteria, and parasites.

Even so, house owners are not fans of this way of disposing of dog poop, especially in their backyard.

Lastly, you could scoop up the poop and flush it down the toilet but remember not to throw them with a bag, or it can clog the toilet. You may think that compostable bags are fine, but any load will certainly cause blockages, and thus, it’s best to avoid it.

I know flushable dog poop bags exist too, but they too can clog up the toilet’s plumbing. If the plastic bag you are using is water-soluble, then you may throw it along with the bag.

How does a dog diet affect poop decomposition?

Many factors bring changes to the feces of your pet dog. For instance, if your doggo ate grains or bones, they may appear as white specks in their poop. Such things can attract more bugs and parasites towards it.

Moreover, a meat-based diet makes dog feces smelly and takes more time to decompose, whereas if your canine eats plant-based food, then their poop does not smell that much and decompose fast too.

In addition, dogs with both meat and plant-based foods could have a combination of fecal properties.

That is undoubtedly gross to see, but pet owners must check their dogs’ feces regularly. This is because any change in their fecal matter may indicate an underlying health problem. In addition, dog poop contains millions of bacteria and pathogens that cause diseases.

In a nutshell, a dog’s fecal matter can take up to 9 weeks or more to decompose, but the harmful bacteria and pathogens might still be present there. Also, leaving the dog feces isn’t wise as it can invite lots of parasites and be the cause of transmitting diseases. In short, dog poop takes a lot of time to decompose, and it creates a risk factor for other animals and dogs, too, so it’s best to get rid of it.