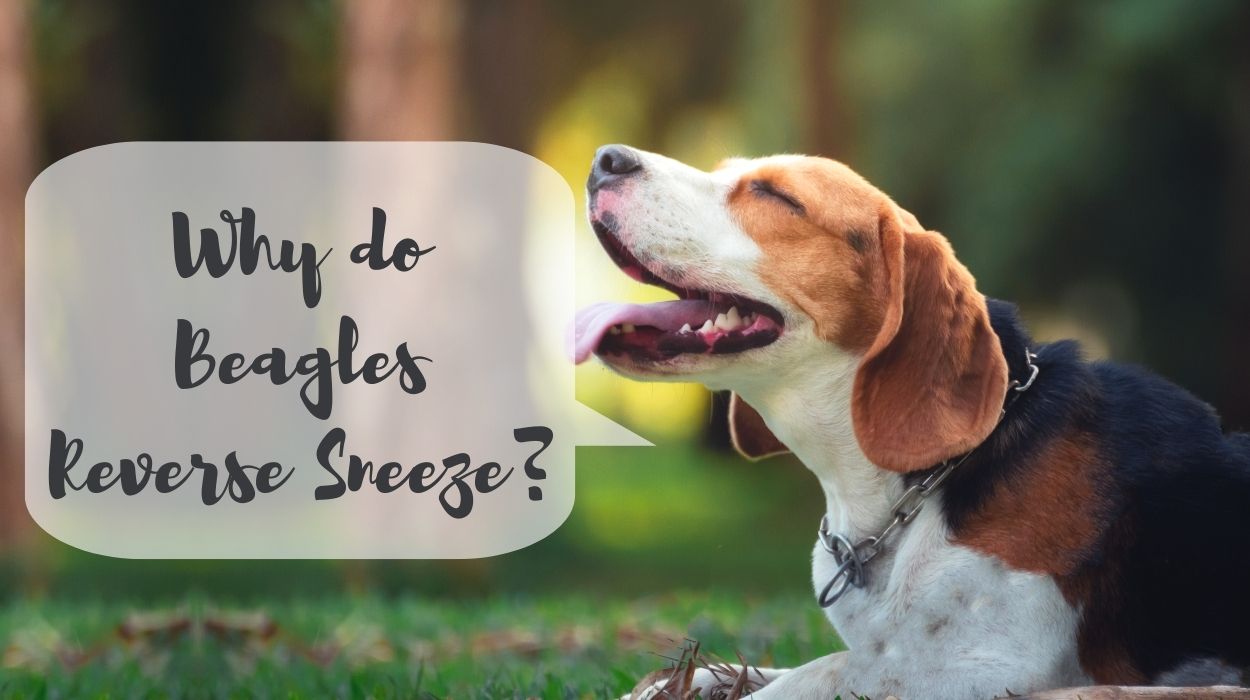 Did you even know what a reverse sneeze is as a Beagle parent? Or you just got jump scared when you heard your dog honking, wheezy, and snorting all together!

Well, that’s reverse sneezing, but is it normal, or has your dog just caught a severe cold? Because it doesn’t sound normal, it looks like your Beagle is struggling to breathe and making sounds like a goose.

This guide on Beagle reverse sneezing has everything you need to get started. You will learn why and when reverse sneezing episodes are triggered in Beagles and how to cure them effectively.

Reverse sneeze: what is it?

Pharyngeal gag reflex, Reverse Sneeze, is a combination of hiccups, snort, and hiss, occurring in brachiocephalic and smaller breeds.

Is it common for Beagles to reverse sneeze?

The short answer is yes, it is normal for Beagles to reverse sneeze! These sneezing episodes last only for seconds.

Any Beagle will be excellent before and after reverse sneezing, as it’s not that harmful as it looks to be. So as long as the Sneezing Episodes extend not more than 30 seconds, you got nothing to be worried about.

Reverse Sneeze – How To Identify It?

Beagles would make rapid and long respirations, stand still, and extend their head and neck; this is a position for them to reverse sneeze!

Most owners have stated that it feels like something is stuck between the nose and throat of their dogs during the reverse sneeze.

Luckily, it’s not as bad as it sounds. When the soft palate of your Beagle gets irritated, he sneezes backward.

So reverse sneezing basically would sound like your Beagle is inhaling the sneezing; it’s such a loud noise, and you can indeed compare it with the sound goose makes.

What Triggers A Beagle To Reverse Sneeze?

Reverse sneezing is more like the cleaning of nasal passages by pulling the air in; now, this is something that they don’t need to do that often!

So there has to be something that triggers the reverse sneezing episodes, something your Beagle is trying to remove! Let’s find out what are they:

Beagles might cough and repeatedly sneeze if they have developed allergies; it can be from any element, dust, pollen, mold, a flea bite, food, or an irritant.

Such allergies are followed by a runny nose and your dog being extra itchy; it will itch all over the body, especially around the nose.

When sneezing, a white discharge is released from their nose and eyes.

The dog’s nasal mites are a condition in which your Beagle has contracted a specific type of microscopic mite that makes a home in the nasal passages and sinus cavities.

This will not only make your Beagle sneeze like a horse but in the worst case, bleeding is also witnessed from its nose.

Yes, obesity in Beagles can cause them to reverse sneeze! Although it’s pretty different from the regular reverse sneeze, for instance, you may observe them gasping, unable to breathe, and heavy snorting.

This is caused due to the obstruction in the upper airway. And every time you will try to take your Beagle out on a jog or exercise, you will notice them being extra sneezy-Weezy!

Foxtails are particularly dangerous due to the positioning of their barbs, which allow them to burrow ever deeper into your dog’s body via the skin, nose, ears, and even eyes, causing severe damage to internal organs and structures.

Smoke: Just like us, Beagles are also allergic to smoke. They will start snorting as soon as they contact any kind of smoke. Hence, it’s not necessary for all the dogs.

If your dog’s reverse sneezing episodes exceed 30 seconds, then your dog needs medical attention. Otherwise, it’s entirely normal and the cause is likely to be its surrounding environmental condition.

You need to make sure that your home is a space for them to promote no such allergic reactions.

Here are a few steps you should take:

How Can I Minimize Reverse Sneezing?

To comfort your Beagle during an episode, place your fingers in both nostrils, then let him breathe through his mouth. If that doesn’t work, try massaging his throat.

If the above step is not working, consider the given ways:

When Is It Time To See The Vet?

While in most cases, reverse sneezing can be expected; still, there are few chances of it being a cause for concern!

The first step any vet would take is to rule out the possibility of underlying issues by a few tests. They will check your dog’s nasal passages and throat thoroughly. They will also look out for any present mites, tumors, or polyps.

To rule out the possibility of nasal cancer, they will collect a sample from the nasal passages.

Tracheal collapse in Beagles or any other dog is a condition that is so similar to reverse sneezing.

When a Beagle has been diagnosed with a collapsed trachea, it will have a hacking cough sporadically. Sometimes it’s minimum, and sometimes it’s all the time.

Surprisingly, no cough meds can stop the symptoms.

Give one tablespoon every hour, three times a day.

Side effect: Sleepiness is the most common side effect. Do not use these with hydrocodone. Instead, try a different cough suppressant.

We hope now you know that a reverse sneezing episode is a standard and expected in smaller breeds like Beagles if they last not more than 30 seconds.

There are several reasons which trigger the reverse sneezing in dogs, and fortunately, you can control them by making minor changes in your house.

However, your dog may also express such reverse sneezing episodes very frequently and daily. In that case, you might need to book an appointment with the vet. It could be a sign of other underlying issues like nasal mites, nasal cancer, tracheal collapse, etc. as well.

Did you find this information helpful? If you want to share your doggo’s reverse sneezing experience with us, let us know about it in the comments section below.