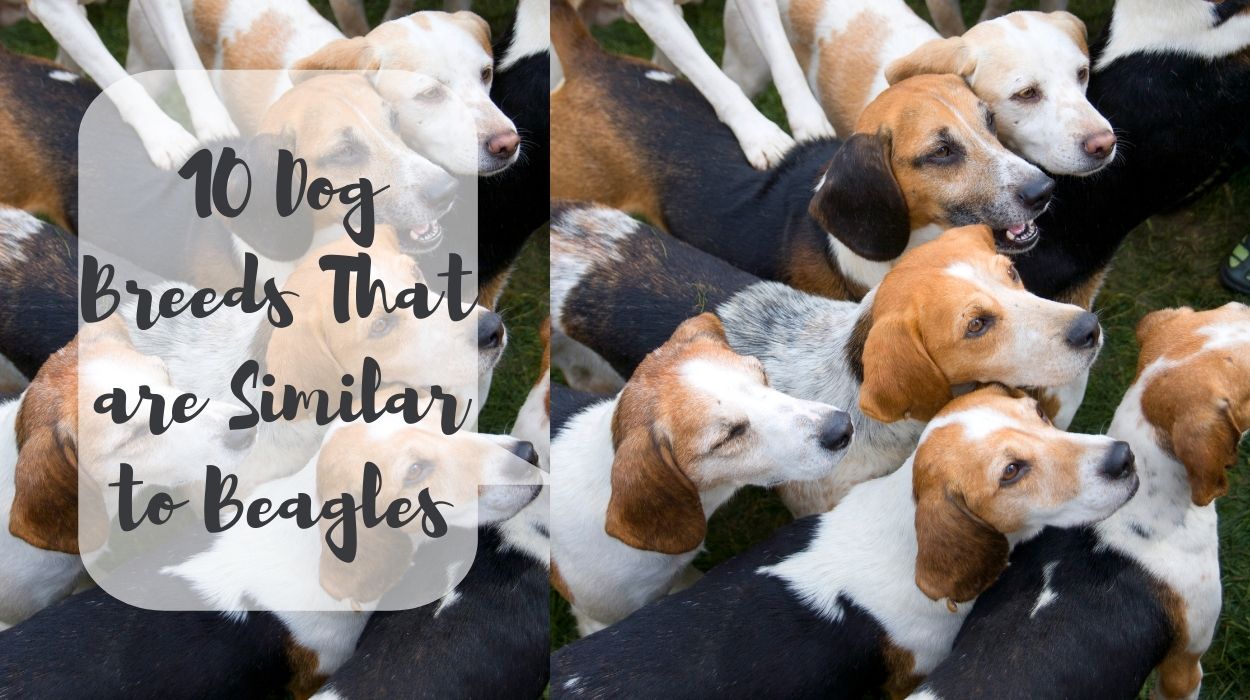 Are you looking for an alternate for a Beagle? If yes, we have some great suggestions for you. There is a possibility that you are having trouble finding a suitable Beagle for yourself. You must now be thinking of settling for another dog with a Beagle’s looks and personality.

You will find many breeds which are similar to Beagles and even display identical characteristics and traits. It would be up to you to select the best.

Let us first look at the basic traits of a Beagle and then move forward to other similar breeds that you can consider.

Beagles are an absolute delight and many people’s favorite. They are hound dogs and are pretty popular. Because of their lively and playful nature, they are widely loved and preferred. They are excellent as pets and quite friendly.

However, you will come across many other dog breeds which are a lot like Beagles- temperament-wise and look-wise. Let’s see!

10 Dogs with Similar Temperament to Beagles

These dog breeds have similar personality traits to that of a beagle. Read on to know more. 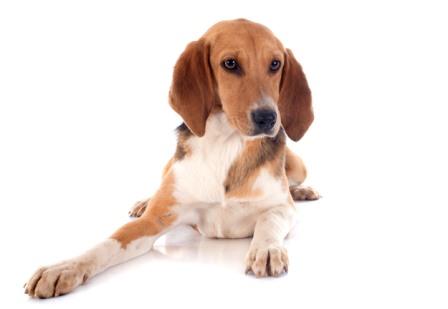 We wonder if you have heard of a Harrier. If not, it is the most similar breed to a beagle. Along with having a temperament similar to Beagles, a Harrier also shares a similar resemblance with them. You’ll be thrilled to know that Harriers are healthier and more energetic than Beagles. But then, like Beagles, they are also friendly and loving.

Similarities between a Harrier and a Beagle

Just like the Beagle, Harrier is also a hunting dog. Their nature is playful and energetic, too. Both the Harrier’s and the Beagle’s social skills are excellent.

You must be aware that a Beagle is known for its sense of smell. Harrier has a great sense of smell, as well. Both the dogs are gentle and affectionate.

It can get a little challenging to train both, owing to their stubborn nature. However, they are both intelligent dogs, and with a bit of patience, they will learn the ways.

Other Features and differences: 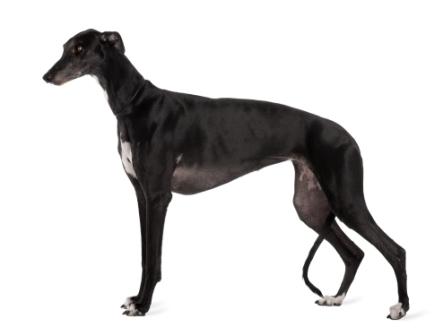 Greyhounds are hunting dogs and can be very active and responsive. They are tall, cheerful, and social dogs who can make wonderful and loyal pets.

Similarities between a Beagle and a Greyhound

The Greyhound and the Beagle have both their origins in the U.K., and they are both hound dogs. Both breeds are affectionate and can be quite friendly with children.

The exercise requirements of both are high since, just like Beagles, Greyhound is also quite energetic. Also, both are low-maintenance dogs.

English Foxhounds, like Beagles, were also popular as hunting dogs. They are medium in size and very energetic dogs. Nature-wise, they are social, loyal, and affectionate.

Foxhounds can make great running/jogging buddies, but they can also be rare to find.

Similarities between an English Foxhound and a Beagle

The Beagle and the Foxhound both are hound dogs. Both are active and have high energy. A Foxhound also has a strong sense of smell, just like Beagle.

Beagles and Foxhounds also resemble a lot physically. Foxhounds have the same ears as Beagles. Both the dogs are intelligent and have good social skills. Also, both are low in maintenance. 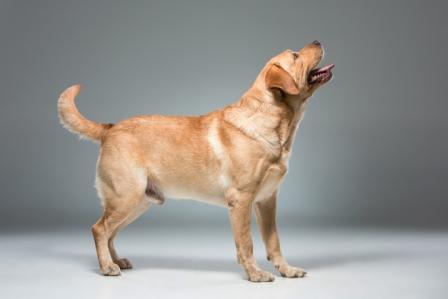 A Labrador Retriever has its origins in Canada. They are friendly, as well as social dogs. They are easily found and, because of their playful nature, are widely preferred.

Similarities between a Beagle and a Labrador retriever

Both the dogs are quite friendly and playful. Along with that, they can be highly affectionate. The sense of smell in Beagles, as well as Labradors, is quite strong.

Both the dogs can prove to be good with kids and can make great family dogs.

Similarities between a Beagle and an English Coonhound

Both are energetic dogs and require a good dose of exercising per day. They are both good with kids and with new owners. Just like Beagles, English Coonhounds can be quite friendly, loving, loyal, as well as stubborn. 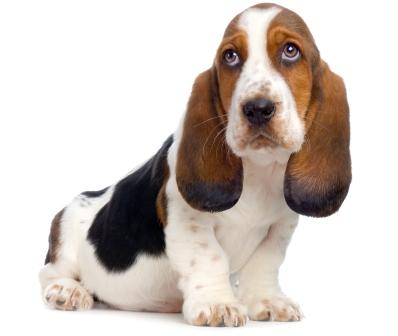 A Basset hound has its origins in France. They were also used for hunting small animals. Basset hounds are easy-going with an affectionate, social, and loving temperament.

It is a readily available breed and is preferred by many.

Similarities between a Basset hound and a Beagle

Both the Beagle and a Basset hound belong to the hound group. You will be surprised to know that they are nearly similar in size as well. Just like Beagles, Basset hounds too have tiny legs.

Basset hounds can prove to be great pets because they are affectionate and playful, just like Beagles. Both also have similar fur and coat and are low on maintenance. The sense of smell in both is strong. 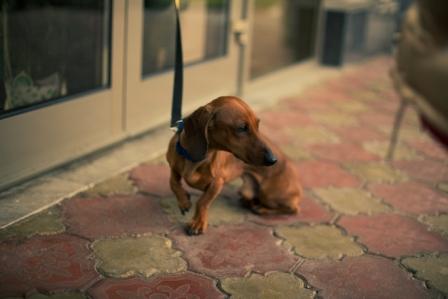 Dachshunds are a dog breed with origins in Germany. They are hound dogs and were used for hunting too. They are loyal, affectionate, and playful, hence making great pets.

Similarities between a Dachshund and a Beagle

Beagles and Dachshunds are smaller dogs and somewhat similar in size, with a little difference. They also weigh nearly the same. Both are low-maintenance dogs, and their life span is also similar.

They are both intelligent, loving, and lively dogs; and are kids-friendly as well.

Other features and differences

A Drever has its origins in Sweden. Just like Beagles, they are also Hound dogs. They are outgoing, loving, alert, and friendly in nature. A Driver is also a small dog, like Beagle.

Similarities between a Drever and a Beagle

A Beagle and Drever look a lot similar. The ears of a Drever are much like a Beagle’s long and floppy ears.

Both are energetic dogs and will require daily exercising to remain fit and active. Both the dog breeds are low maintenance as they have short coats of fur.

A Hamiltonstovare is another dog breed that looks a lot like a Beagle. It is a hound dog that was effective in hunting. They are attractive dogs, which are at the same time intelligent and friendly. It is also known as Hamilton Hound or Swedish Foxhound.

Similarities between a Beagle and a Hamiltonstovare

Both Beagle and Hamiltonstovare are hound dogs. Both the dogs are quite friendly with kids as well as with new owners. They are both low-maintenance dogs.

The American Foxhound has its origins in the U.S. It is a hound dog, just like Beagle, and looks a lot similar to it. However, it is bigger than a Beagle.

Similarities between a Beagle and an American Foxhound

The American Foxhound and Beagle have similar floppy and long ears. Their coats are also very much similar with short fur. Both are kid-friendly and need low maintenance. An American Foxhound is quite friendly, gentle, energetic, and sweet.

How to choose the right dog breed?

Choosing the right dog breed for yourself is a vital decision. Not every dog breed is suitable for everyone. You must do your level of research and see what kind of dog will suit you the best.

Try to look for a dog with a friendly nature. It would be great if they were adaptable and could get adjusted well. Also, dogs who are good with children would be a plus point if you live in a house with kids.

Dogs with short fur are low on maintenance and do not require a lot of attending. Many dog breeds can be stubborn and difficult to train, but with a bit of patience, you should be able to discipline and train them.

Apart from that, it is important to give due care to your dogs. They will have daily nutrition/walk/exercising requirements. You must choose the dog for yourself whose needs you can afford to address.

We have discussed a number of dog breeds for you, which are similar to Beagles. Now it is for you to decide which one you find the most suitable for yourself and your family.

We only hope that you find your perfect dog partner soon. Once you do, we would love to hear about it.