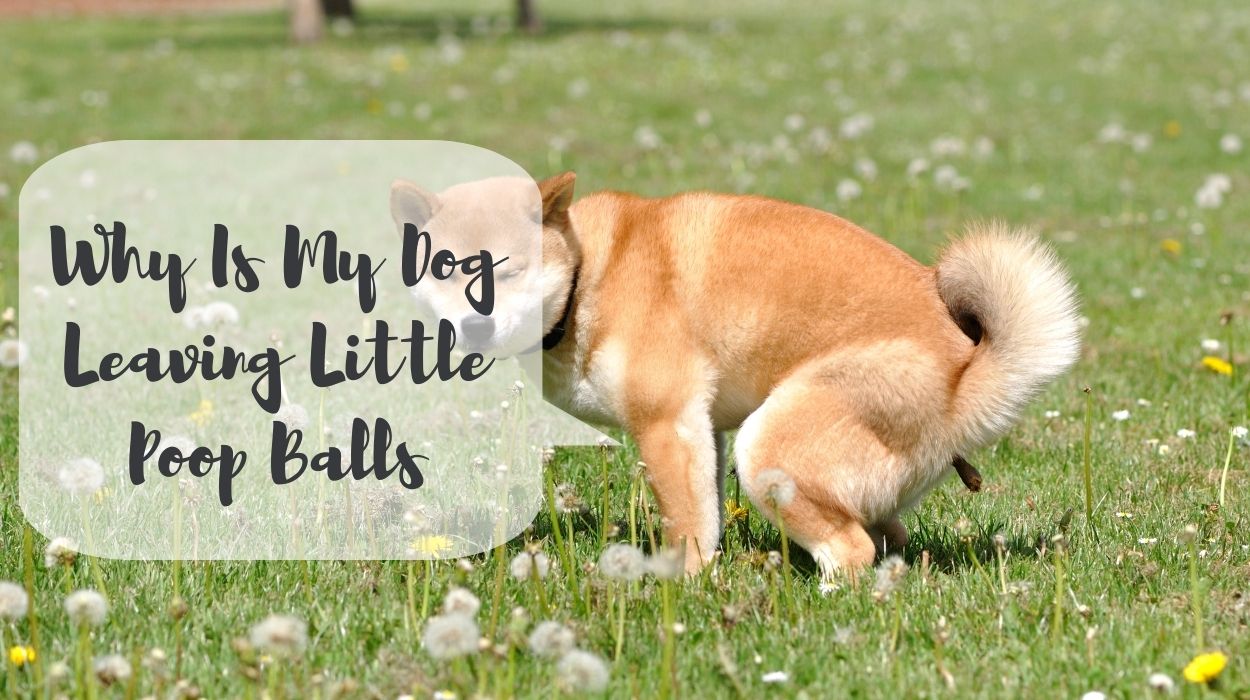 Why is my dog pooping balls around the house? That’s a common question many modern pets, specifically dog owners, ask themselves at some point. If you’re asking yourself that question, then I’ve got you covered!

If your pet is trained at home and still leaves poop balls, then you’ve got a problem. Like most things however, there’s a good fix for this. Keep reading further to understand why your dog exhibits this behavior and how you can stop it. 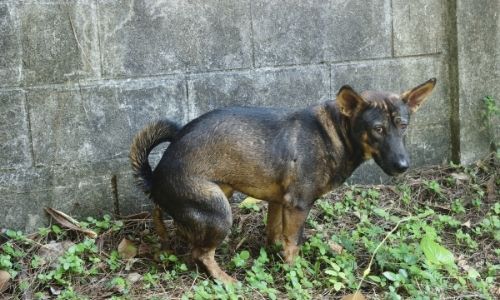 Whether it be recent or for a good while, your dog leaving small poop balls is a matter of concern. Before you’re made aware of its solutions, it’s key to know as to why your dog is doing so. So, without further ado, let me explain some possible reasons.

The first reason is constipation. If you see that your dog’s poop is hard or has blood in it, they are signs of constipation or infection. As a result, sometimes dogs leave little balls of poop if they are constipated.

In short, your dog may not have enough fiber in their diet, which can cause them to have trouble going to the bathroom when they need to go, leading them to hold it in for more extended periods, which can lead to constipation or, even worse.

Hence, it becomes difficult for your dog to pass out the entire poop and excrete at intervals while they are at home. In short, your puppy can control their defecation, but it hurts when they poop.

So, you can add some fibrous foods to their diet such as:

They all are rich sources of fiber. So, consider introducing an adequate amount of fiber content in your doggo’s diet to avoid issues like constipation.

Another quite common reason is bowel incontinence. The dog may be experiencing some bowel problem that makes them unable to control when they go to the bathroom. This could be due to old age or something else entirely.

Generally, dogs that recently suffer from bowel incontinence initially leave small poop balls at random places. Further, this condition gets from bad to worse as your doggo may drop their fecal matter more often and still won’t be able to stop the urge due to the lack of control.

Take note that dogs suffering from this condition get bloated too.

Apart from this, doggo’s may get bowel incontinence due to a poor diet, muscle injury, parasitic infection, or medications.

So, if you see your doggo licking their rectum area or rubbing it against the floor, it’s because of the irritation caused by the incontinence.

There could be a less severe reason why your leaves poop balls as they might have some injury. Simply put, an injured canine will not be able to move swiftly, and when they feel the urge to poop, they possibly can run outdoors and thus excrete as they go out.

In such scenarios, you can make a small poop crate indoors, which your dog can reach easily without much hassle no matter the injury or deformity they have. One such condition is hip dysplasia which causes severe pain in canines as they squat to poop and thus, change the position to ease this ache.

Ultimately your dog will poop in small balls when you pick your dog from the hips or put some pressure in that area. If your doggo tends to cry or yelp, they may have this condition. Overall, it’s best to consult a veterinary doctor to treat this complication.

The following probable reason could be that your dog may have some neurological issue. Typically, this occurs when dogs get older as their mental and physical health deteriorates.

Altogether, your doggo might develop a condition due to aging where they become forgetful and have incontinence along with it.

Regardless, it can be a deeper issue as well. If your dog’s cognition reduces, they tend to pee everywhere. In such cases, some dogs may show aggression too. Other than that, older dogs cannot hold their poop like before as they age as their muscle strength declines.

This is precisely why older dogs suffer from fecal incontinence more often. As a result, it’s best if you opt for a proper diagnosis from a veterinary doctor to check if your dog has a condition of dementia. 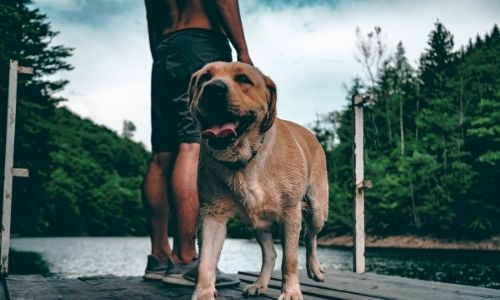 The list does not end here when you want to know why your dog leaves poop balls indoors. Other medical complications like arthritis also cause pain in dogs when they squat to defecate; the posture could trigger joint pain.

Additionally, there’s a disease known as degenerative myelopathy that affects the spinal cord region of the dog. In this condition, the hind limbs get weak and paralyzed later and are usually found in 4-14-year-old dogs (this disease is rarely found in young pups). This problem also leads to incontinence since dogs lose control of their hind limbs.

Altogether, there are many reasons why a dog drops poop balls around the house, but all of them are only applicable if the dog is house trained. If you have recently adopted a dog, then they do so because:

However, this problem will eventually disappear in some weeks as your dog will get accustomed to a new routine for pooping. If your dog shows signs that they are not trained that well, you can teach them to go outdoors when they urge to poop.

Plus, your doggo may become anxious when you are not around and tend to chew furniture, cry, whine or scratch the windows.

So, train your dog to calmly stay in their crate and distract them with toys (avoid giving objects they can swallow) to make them comfortable while you are away. Sometimes if dogs get afraid of noise such as thunder or fireworks, they may poop or urinate indoors; you could distract them in this situation by doing their favorite activities.

Even so, if your dog drops poop balls randomly recently, then it’s possible due to some medical condition.

Why does my dog poop so often?

Generally, dogs defecate 1-5 times a day. If your dog is pooping a lot suddenly, a simple reason could be because they ate a lot that day. However, sometimes their environment or stress can also cause them to poop.

Nonetheless, it’s not a complex problem unless due to any change, such as stress. So, it’s best to monitor what food they eat to ensure they get nutritious food and don’t munch on table scraps that are not beneficial for them.

You’ll be surprised to know that in some scenarios, when a dog feels happy both physically and mentally, they too tend to poop often.

Why My Dog Can Not Control His Bowel Movements? 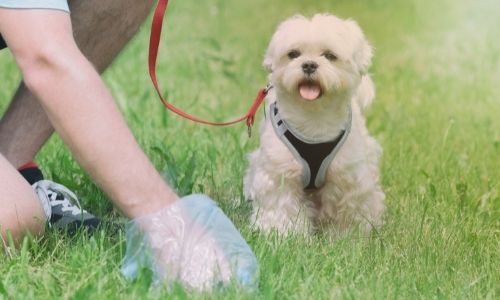 As said before, dogs lose bowel movements due to incontinence or an injury that causes the same. Hence, your canine may struggle to hold their poop until they reach outdoors, or their rectal muscles fail to function correctly.

This could be one of the reasons why your puppy is unable to control its poop. Moreover, your puppy may suffer from perianal fistula, a severe medical condition that occurs due to an infection. However, this is usually found in german shepherds but can be found in other breeds.

In this condition, your doggo will strain when they poop, and other symptoms include:

Also, there will be some changes in their behavior, like being more agitated, depressed, or aggressive. You can use dog diapers to tackle this issue.

My dog’s poop is too soft. Is something wrong?

If you notice that your dog’s poop is soft, it’s normal; there’s nothing wrong. However, if the feces is mushy or hard to scoop, it could be diarrhea. In such cases, I would suggest you cross-check what they ate and look for other signs of diarrhea.

Any change in the fecal matter indicates their underlying health condition, so you should examine it. To make sure your dog is healthy, you can visit the vet and inspect the feces.

In a nutshell, there are various medical issues or behavioral problems due to why your dog might leave poop balls around the house. Nevertheless, it’s crucial to determine why your dog is dropping poop balls inside the house since there could be genuine medical conditions or stress. Consulting the vet is the best option to diagnose any issue and help with treatment.