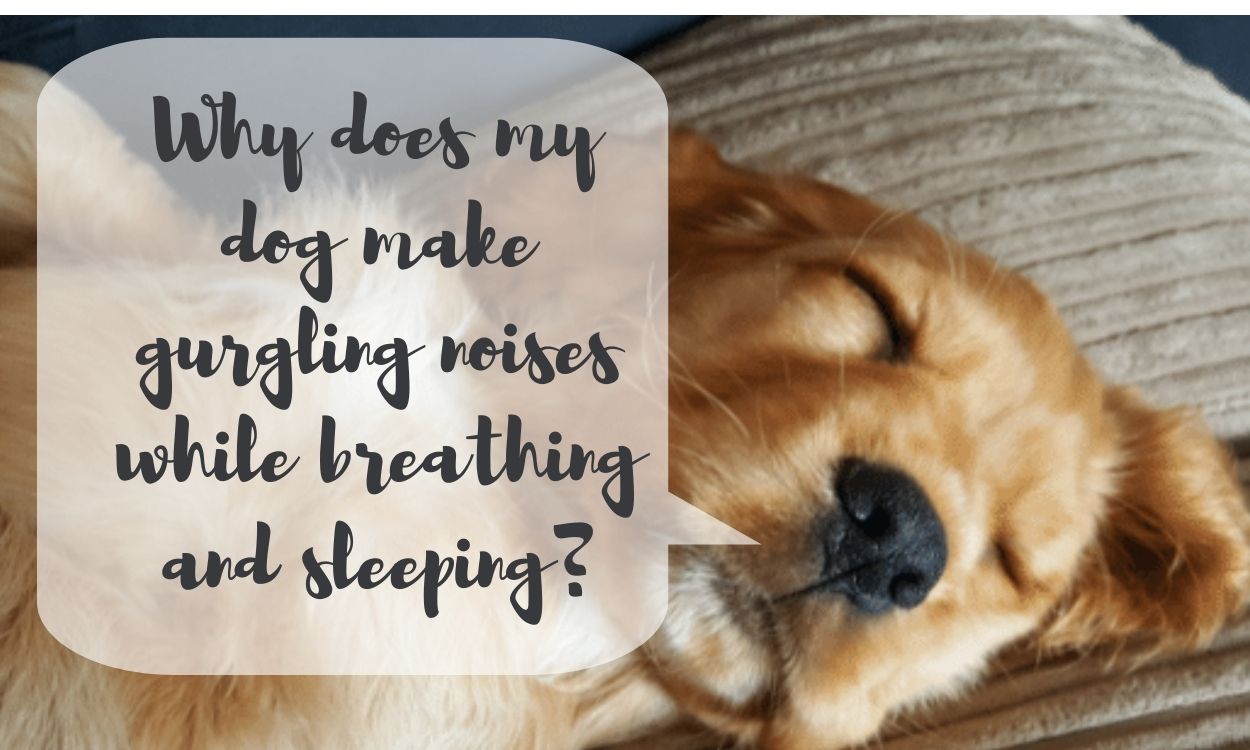 First, paddling their legs in the air, and now this weird gurgling/bubbling noise while sleeping! What does your dog want? As it sounds like a fluid buildup, does it indicate sickness? Should you be concerned about this noise?

Well, yes and no! It is a matter of situation. There are two scenarios: first, the gurgling can be just a “dog thing,” and secondly, it is a cause for concern! To know more, you have to read the entire article.

In this article, we will tell you different reasons behind the gurgling of your dog, when you should see a vet, and remedies to eliminate it.

Gurgling sounds in dogs, is it normal?

The researchers used an electroencephalogram to test dogs’ brain activity while they sleep and discover that dogs do have dreams.

One common thing in humans and dogs is that they both dream!  As we can’t see dreams, in that quick nap of 15-20 minutes, it’s the same for the dogs too.

So the dreaming part occurs at a particular point, and in dogs, this point is known as REM (rapid eye movement); in this phase, the breathing of your dog becomes so rapid that it sounds like he’s gurgling, with rapid movement of his eyes and their eyelids would flick!

So the breathing sound (gurgling) that dogs make during their sleep is considered normal!

Gurgling sounds while awake: what does it mean?

Now, you know that gurgling sound in sleep is something not to be worried about, but if he’s making the gurgling noise while breathing and being awake, it’s not good!

Usually, dog’s gurgling sound while breathing is also known as a stertor!

What is a stertor?

“The stertor is a loud respiratory pattern. It is a low-pitched loud breathing sound due to fluid vibrations or the vibrations of secure or flabby tissue. It’s far as a result of an obstruction within the throat’s airway.”

In dogs, noisy breathing or respiratory noise might lead them to use extra effort just to breathe correctly.

Furthermore, your dog may be under a lot of stress due to a buildup of resistance in their windpipe or throat.

The most common cause of resistance is narrowing the pharynx, throat, or larynx, the upper half of your dog’s windpipe.

Typically, dogs with squished faces like pug, French bulldog, boxer, mastiff, English bulldog, Boston terrier, etc., are more prone to this disease. These dogs have a very short noses and flat faces; that’s why the internal structure affects their breathing.

So, now you know that if you have a dog who’s gurgling even when he’s awake, it’s a problem, and you should take him to the vet!

Note: This is a progressive syndrome; your dog might have to undergo surgery if it has gotten worse, so the sooner you take action, the better life he gets!

Gurgling sound while sleeping: what does it mean?

The gurgling sound your dog makes while sleeping is not something you need to worry about unless you feel your dog choking or suffocating. Studies state that just like us humans, dogs can have dreams.

Muscle twitching, eye lip moments, and vocalization are accompanied by a gurgling sound of a dreaming dog.

So basically, growling and barking are almost definitely merely nightmares, as are kicking, flicking the tail, chattering (lips slightly drawn back, mouth acting like chewing with little quick motions while making sound), and twitching.

You don’t need to worry if it’s accompanied by a bit of snorting, snoring, gurgling, and another sort of noise as your dog must be chasing a superfast squirrel in his dreams. Dogs usually dream of daily activities like playing, running, chasing, etc.

Once your dog is off to sleep, he takes at least 20 minutes to go into a deep sleep mode where he experiences such dreams and makes weird noises! Their breathing gets shallow and irregular.

In the end, though, your dog is only dreaming. In some ways, it’s a positive thing since it shows your dog is comfortable and safe enough to fall into the deep R.E.M. slumber required even to begin to dream like that.

Puppies and old dogs are more inclined toward gurgling in their sleep.

Warning: It is usual for your dog to breathe fast for a few minutes while sleeping; if it persists, you should take a trip to the vet.

When is fast nose breathing normally for dogs during sleep?

As soon as your dog goes to sleep, after 20 minutes, observe him; if you see the following signs, then it’s completely normal:

When is fast nose breathing abnormally for dogs during sleep?

Some breeds are prone to lung-related issues; if your dog is one of them, you need to be very alert!

Reasons why your dog makes a gurgling sound while breathing and sleeping!

There are numerous reasons for your dog to make a gurgling sound while breathing and sleeping apart from the serious ones. Let’s have a look at them.

The other reason your dog makes bubbling and gurgling sounds can be due to paralysis of the voice box, conduction, named Laryngeal paralysis.

When breathing, the larynx’s cartilages do not open and close normally.

You should not ignore these warning signs, as it takes from months to even years for respiratory distress to be evident. If it’s a mild case, your dog will be relieved by Tranquilizers and corticosteroids. When the damage is done, the dog will need surgery.

2. Does your dog have allergies?

Dogs experience rare allergies to particular types of food. Such allergies can make your dog’s nose swell, resulting in such noise.

As with humans, dogs can catch a cold too! The cold can make your dog’s nose runny, resulting in a weird gurgling sound. You can also tell if your dog has a cold if he’s sneezing, feverish, or has a stuffy nose.

You don’t need to worry much in this case, as it will clear up independently.

4. Is your dog getting fat lately?

Breathing difficulty has a direct connection with the weight gain of your dog. More tissues are generated in overweight dogs, blocking the dog’s airway.

5. Was your dog born with a tiny nose?

Dogs that have a little nose naturally will be prone to breathing issues! They would sleep more than other dogs, and it should not be a problem!

How do treat gurgling sounds in your dog?

You should micromanage your dog’s weight and cut off the treats and extra carbs from his diet if it increases.

Surprisingly, the same thing can have different meanings in different situations: sleeping and awakening! We hope you know the difference between trouble gurgling noise and normal gurgling.

However, if your dog has been gurgling a lot while breathing, you should visit the vet without wasting any time as it could be a sign of severe conditions. We promised to always be genuine! It’s not always cute videos and rainbows when you have a dog; there are tough days too!