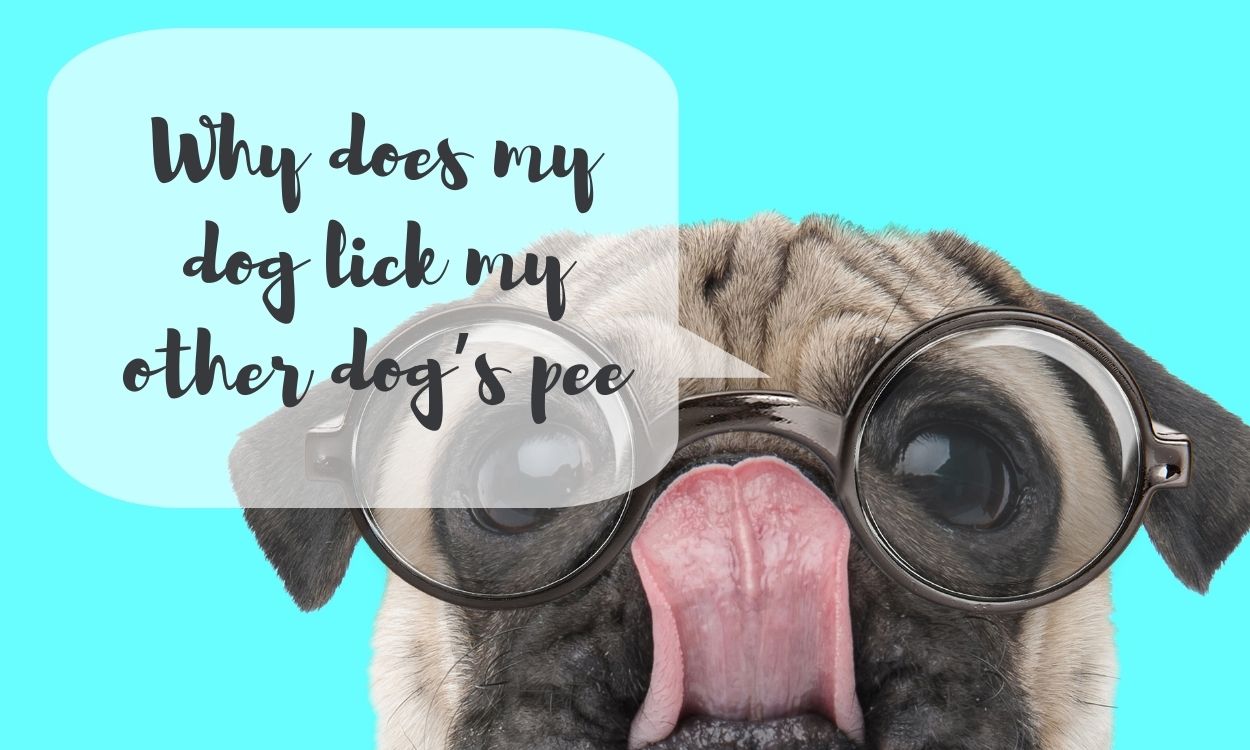 While you were talking to your friend in the dog’s park, you noticed your dog licking other dogs’ pee, and it was disturbing and embarrassing for you, and you wanted to know why he is behaving like this?

Well, many pet owners come across such situations on a daily basis; that’s why we have written a whole article about why your dog does this.

Don’t worry; it is typical for your dog to behave like this. If you want to get rid of this behavior, read our piece until the end.

Why does a dog lick another dog’s pee?

Jacobson’s organ, a.k.a vomeronasal organ, is responsible for a dog licking other dogs’ pee behavior.

It is present in the vomer bone of the dog—it is a small, thin, plow-shaped, midline bone that occupies and divides the nasal cavity. In plain English, it is in the middle section of the nose and mouth of your dog.

The primary function of this organ is to send messages to the dog’s brain after collecting them from the surroundings.

Another vital function of Jacobson’s organ is to scrutinize pheromones present in the dog’s surroundings. Now, you must be wondering what pheromones are, right?

Pheromones are compounds produced by one individual to the outer world and picked up by another member of the same species.

Pheromone is an essential part of a canine’s life. It helps them hunt, and they get information when they sniff pheromones from the surroundings; it helps them build their social relationship.

When a dog licks the pee of another dog, it usually raises its muzzle and rubs its tongue on the upper covering of its mouth.

Other dogs prefer the Flehmen reaction, which involves freezing and curling their tongue in a strange manner.

Both methods aim to appreciate the pee’s flavor while also transporting as much urine as possible to Jacobson’s organ for later extraction of information.

In any case, dogs may seem to be enjoying the taste. On that point, I’m not guessing. The flavor may also appeal to dogs. Well, it’s impossible to tell.

Did you know a dog pee has several chemical compounds? It includes bacteria, sugar (if he is a patient of diabetes), ammonia, hormones, and ammonia.

Ammonia and uric acid don’t play an essential role in providing a dog message; on the other hand, hormones and bacteria tell a lot about their health. A healthy dog pee’s bacteria is not at all harmful. But, your dog may also like the taste of the sugar.

So far, you know the reason behind your dog licking other dogs’ pee but are you worried and think it is an unhealthy behavior?

Well, don’t worry, you can learn that in the next section.

Is licking other dogs’ pee harmful for dogs?

Well, in short, dogs cannot get sick if they lick pee. It is because they have a robust immune system, and their stomach produces acids that help them to get rid of potential dangers.

Therefore, a healthy dog cannot get ill if he licks urine.

But, if your dog is not healthy and has a weak immune system, then it will be hard for him to deal with sickness caused by licking other dogs’ pee.

Typically there are two conditions under which your dog is at higher risk if they lick other dogs’ pee first, if you have a young puppy who is underdeveloped, and second if you have a senior dog who is weak because of aging.

Leptospirosis is the most dangerous infection that damages the kidneys and liver severely, and in severe cases, it can be fatal. It occurs due to bacteria called Leptospira.

In case your dog is suffering from Leptospirosis, he is likely to have the following symptoms.

Contact your veterinarian if you detect your dog has been exposed to Leptospirosis or is showing indications of sickness.

Although parasites, gastrointestinal viruses like parvo cannot spread if the dog licks other dogs’ urine. But, they can get infected with these health problems when they lick the genitals of an infected dog.

It is because an infected dog can spread the virus via its anus.

Did you find your dog licking his own pee? There are multiple reasons why they do so. You will learn in the coming up section.

Why does the dog lick his own pee?

Well, if your dog is drinking another dog’s pee, it is not abnormal behavior; it is general canine behavior.

But, if your dog is drinking his pee, then it is a sign of illness. Typically, there are four causes for this behavior. And, let me tell you, all of these reasons will horrify you.

The first reason is quite obvious is dehydration. If you don’t provide your dog with enough water to drink, he will become dehydrated. As a result, he will end up drinking his own pee.

Fun fact: Did you know every dog must drink 1 ounce of water daily per pound of body weight.

And, when a dog doesn’t get this much water naturally, his body processes his own pee.

Second, it could be negative behavior, and this can come from multiple reasons.

It can be prohibited if you give your dog behavioral therapy and training. If it still remains the same, then you will need professional help.

Third, he might be trying to remove his witness. If your dog accidentally pees inside your house, he knows you will get angry because of this. That time your pet will try to eliminate his evidence by drinking his own pee.

Fourth, lastly, your drinking his own pee could be because of a medical problem. It can be because of Diabetes Mellitus, Kidney failure, Urinary tract infection, and Cushing’s disease.

Make sure to consult your vet if you suspect any of the following medical conditions.

What can I do if my dog licks other dogs’ pee?

You can stop your dog from licking other dogs’ pee as you know already it can make him ill if he gets in touch with an infected dog.

Well, you may find it disgusting behavior, but it is normal canine behavior. If you want to stop this, you must have a bag full of patience to deal with it. And, you can also follow the following tricks.

You can stop this if you give your appropriate dog training. You can teach him more commands like “drop it” and “leave it.” This will help you to interfere when your dog starts licking other dogs’ urine.

You can use positive reinforcement tricks like praising him, rubbing his belly, and giving him a treat every time he follows your command.

If your dog still repeats the same behavior, you can try to give him training in a controlled environment.

That means you have to invite healthy dogs into your backyard and teach them to supervise and work on the commands.

Use a leash while walking.

When you take your dog to a walk-in dog park, or when he goes out for play, he will see other dogs licking the pee of another dog.

So, he will also attempt to follow the same behavior. That time using a leash will help you to control your dog’s actions.

Also, always keep an eye on him and take him out for playing only with healthy dogs.

Is it true that some dogs are more likely to lick the pee of other dogs?

Yes, some dogs are more likely to lick other dogs’ urine. Typically if your dog is male and unneutered, then he will be more interested in licking other canines’ pee if you compare him with neutered males and females.

The simple logic behind this behavior is that they seek to mate someone; therefore, they are always on the hunt for a partner.

When female dogs reach the fertile stage of their cycle, they can get concerned with licking other dogs’ urine. This is a rare occurrence among spayed females.

Just like we like to gossip and speak, licking other dogs’ pee for your pet is similar to that. They get to learn new things from it.

You may gross out when you see your dog licking other dogs’ pee, but it is normal canine behavior.

However, you can get rid of this if you give your cute doggie adequate training or use a leash when you take him out for a walk.

To know in detail the reason for your dog drinking other dog urine behavior, go read our article now. If this article helped to solve your doubts, do let us know in the comment section below.