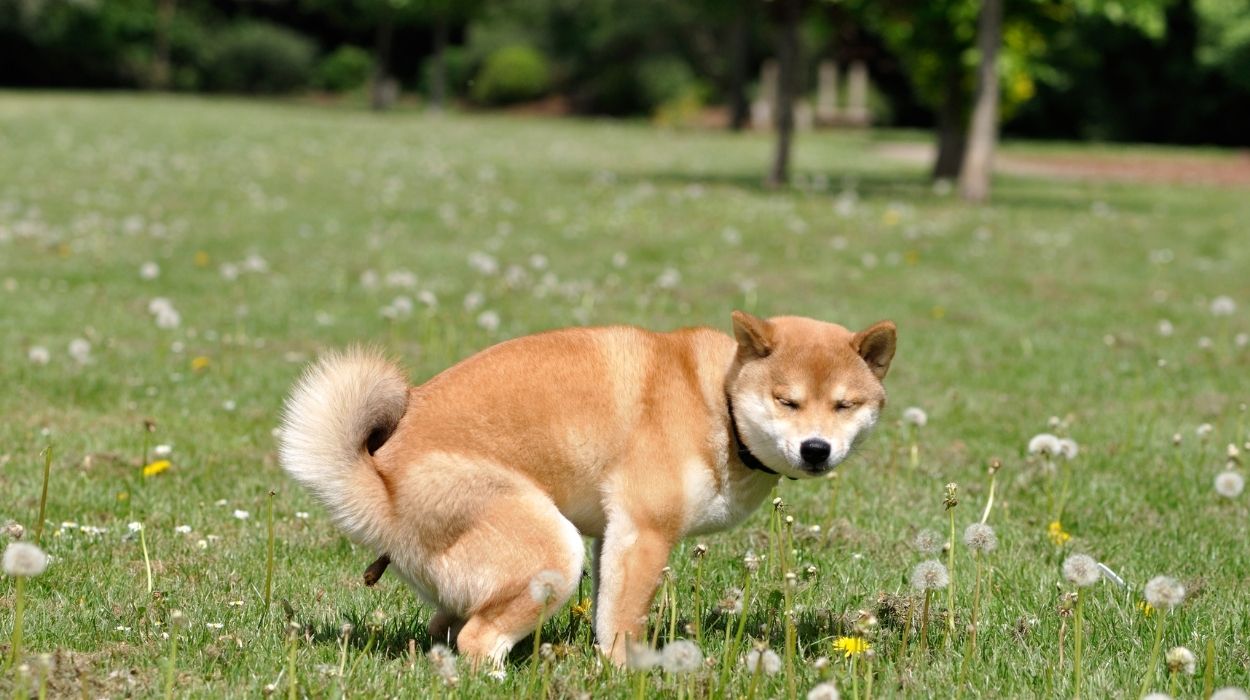 Dogs are curious creatures and they explore the world with the help of their noses and mouths. This means they have a knack for catching intestinal worms which are a common yet continuous threat.

So, sometimes you may see worms in your dog’s poop. Thankfully, the deworming process is straightforward, easy, and quick. Therefore, you can solve the problem without any hassle.

Despite this, you still need to know how long they will continue to poop worms so that you don’t unnecessarily take a vet visit or become overly concerned and panicked.

After deworming, puppies will poop worms for about 2-3 days. Any parasites in their gut will die between 2-14 hours. However, it is not an issue if they still poop for a week after getting dewormed.

Intestinal parasites are a natural occurrence, but you will still want to eliminate them as soon as possible.

How do puppies get worms? 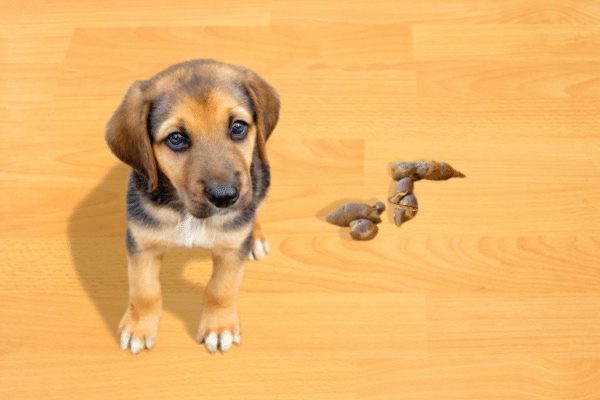 There are a number of ways your puppy can get worms in their poop:

1. From mom to puppy

This type of transmission from mother to children happens commonly. It happens to the pups at birth or when they are still living with their mothers. If the mother is infected then it will pass through the bloodstream or when she is feeding them.

Roundworms can be transmitted while they are still in their mother’s uterus while parasites can be transferred from the mother’s milk.

Dogs and their curiosity often gets them in trouble. They like to taste and lick everything. As a result, they ingest plenty of dirt. Both grass and soil can carry worm eggs and larvae.

When infected animals poop, they leave behind parasites on various surfaces. Upon coming into contact with them, your pup may ingest them and get themselves infected. Even after you clean up the poop, the eggs and larvae can sustain themselves on plants and soil for a long time.

3. Getting it from other animals and insects

If you have many pets in your house then it is important that all of them are regularly dewormed because parasites spread easily from animal to animal. This is the most trouble-free way for dogs to get infected.

Through poop, worms eggs will spread from one to another.  They can poison food and make the surfaces unhygienic. So, it is crucial to keep your pup from eating poop left by other animals.

If they swallow a flea that carries tapeworms, your dog can get infected.

Snails can transmit lungworms while mosquitos carry heartworms that can pass the parasite from one dog to another.

Dead animals and birds have fleas or parasites around them. This can also attract dogs so it is best to take your dog to play in a place free of problems.

Dogs are self-grooming in nature but when they lick their fur, they may devour parasite eggs in the process.

As long they are in touch with the environment, they will come into contact with dirt. That’s why it is a must to keep them clean and bathed. The chances of your pup carrying the eggs on their coat will reduce.

Signs that your puppy has worms

There are a few signs you can look out for to find out if your puppy has worms:

The obvious one is when you see worms in your puppy’s excrement. Parasites gather in the intestines and some will be passed on when your dog poops.

While it is not common to find them in the pup’s vomit, pooping and vomiting worms can still be a key indicator that your puppy is infected.

Remember not all parasites will be visible to the naked eye. So, you may need a test.

One of the common symptoms we find in infected puppies is bloating. This is especially common in nursing puppies that may have contracted parasites from their mothers.

Your puppy may also have diarrhea with streaks of blood if they were bloated and infected with worms.

Weight loss is another symptom of parasitic infection. When puppies do not grow as anticipated or start to lose weight unexpectedly, then they might have worms in their gut.

It is the job of the parasite to interfere with the pup’s ability to absorb nutrients from food which leads to weight loss.

As they grow or put on weight, they may become lethargic and the usual puppy energy may be absent. They won’t be that interested to eat food which is opposite to their natural behavior of being playful and curious.

What to expect after deworming your puppy? 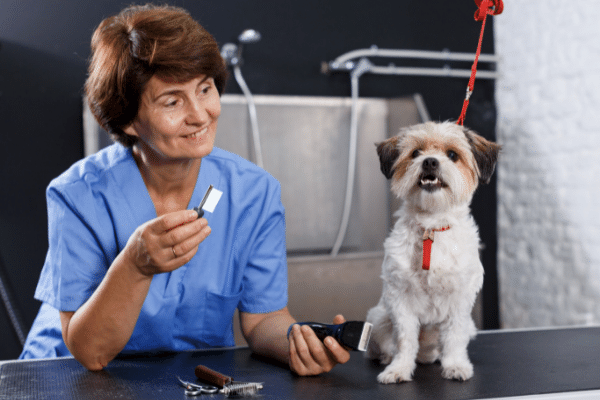 Some dog wormers will paralyse and kill the worms, others will kill and then break up the worms. So, you may not see worms in full length in their poop. In most cases, the process of deworming should start within 12 hours of giving the dewormer.

If your dog had a major affliction before deworming, then the worms may linger for 2 weeks.

Notice that the next time they poop, whole worms or pieces of worms will pass because of the medication. These worms can be still alive and moving which is a gross sight to see. However, they will quickly die.

There are a few side effects you will encounter after deworming:

Bloody stool: Your dogs may have bloody stool after deworming. This is nothing to worry about as it happens because worms detach from the intestines. However, if it happens for more than 3 days, then consult a vet. You may notice that their poop has turned a shade of red or have traces of blood. This is a good sign since the worms are no longer sucking blood and nutrients.

Diarrhea: Your pup may experience diarrhea as the result of inflammation (in the gastrointestinal tract) caused by worms unlatching from the intestines. They make their way through the intestines to get expelled. The diarrhea should be over within 24 to 48 hours and during this, you need to look out for the dead worms. If you spot some live worms then the diarrhea may be there due to a viral infection. This happens when worms aren’t affected by the medication, so you need to see a vet immediately.

Lethargy: Puppies may not be interested in any playful activities after deworming. They won’t be their usual self because of the discomfort caused by diarrhea. So, provide them with plenty of water because diarrhea causes dehydration.

Loss of Appetite: The deworming process is not enjoyable for your dog as it puts their body through stress and discomfort. Dogs will lose interest in food in the week after they have been treated.

Vomiting: Dogs also try to spit out the medicine immediately or after a few minutes of you giving them the medication. They will occasionally vomit right after deworming. If this happens report it to your vet, ask for advice on how to best deworm them again effectively.

The presence of worms in your dog’s faeces is actually a good thing. It means the worms are not surviving in their gut. Once they get rid of the worms, your dog will go back to normal. You can help them by providing a convenient place for them to rest. Keep giving them water to avoid dehydration and diarrhea.

If your puppy still has worms after deworming and they are still moving, this could mean that the medication did not work. Try giving them different medicines.

Before doing so, it is important to wait a couple of weeks so that you don’t end up giving them too many drugs.

Types of worms in your puppy

Different types of worms can inhibit your puppy’s system. Some of them are listed below.

Roundworms are eggs located in soil and plants. They also live on the dead bodies of animals, or in another infected animal’s poop.

They are round, white, smooth and look like living noodles.

Common signs your puppy has roundworms:

You will see them in your dog’s poop for 7 days after you deworm them.

Infected fleas can transport tapeworms to dogs. When ingested, the eggs will hatch making the worm latch onto the intestines. They can grow up 8 inches long. They look like grains of rice and you can find them around the anus as well.

In most cases, it is asymptomatic but some dogs with tapeworms will often scoot their butt on the ground.

Puppies can get hookworms from mothers digesting infected poop. They literally hook themselves onto the pup’s intestinal wall which leads to bleeding and anaemia. You may see blood in their poop as the hookworms are released.

If not treated on time puppies may become weak and pale. It can also lead to death.

They look like roundworms but have long curly tails. They sustain themselves by feeding on the nutrients present in the dog’s food. They can cause bleeding or inflame your dog’s intestine.

Your vet can only detect the presence of whipworms, so collect a sample of your dog’s stool before the visit.

Why is deworming important?

Dogs are naturally curious and inquisitive. They get into trash cans and eat dirty stuff, poke around with dead animals and even play with another dog’s poop. All these actions make them highly prone to infestations.

While they rarely cause serious health problems, they can still make your dog uncomfortable. The intestinal worms live in the dog’s intestinal tract, feeding on their blood and nutrients, making your dog unable to absorb them.

Scooting (when they rub their bottom on the ground)

While young puppies are at most risk, for adult dogs it is merely an inconvenience.

Some worms like roundworms can be passed on to humans which can cause serious health issues for children. In rare cases, if they gather in the brain it can lead to seizures and blindness.

Deworm your puppies every four weeks until they are 4 months old as they are highly prone to infestations. Just because you got rid of some doesn’t mean they won’t come in the future.

After 4 months, you provide deworming treatments a couple of times a year.

While seeing the worms may be gross, you don’t need to worry too much about it. In most cases, the worms will linger for a week.

If you see worms in your dog’s poop for about two weeks, then contact the vet immediately.

Make sure you clean after them properly and deworm them regularly to prevent frequent infestations.