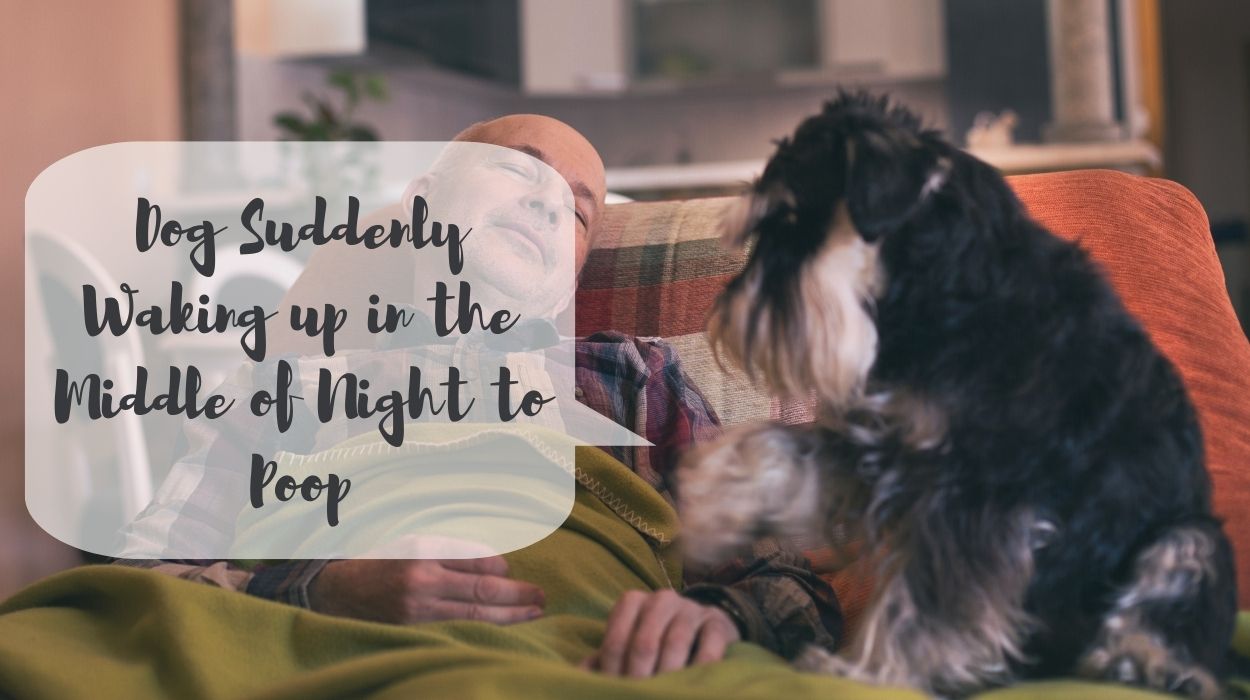 If you aren’t sure what to do to tackle such a situation, this guide will help you. Read on to know more about night pooping among dogs, its causes, and what you can do to resolve the problem.

12 Possible Reasons Why does my dog poop during the night

There are several possible reasons that might force your dog to poop at night. These include behavioral issues, physical illness, medical issues, etc. As a dog parent, it is important that you understand the underlying cause of such behavior and then take appropriate steps.

Anxiety is a significant factor that affects your dog’s behavior. According to a study published in Scientific Reports, approximately 70% of examined dogs showed signs of anxiety. Dogs with such a tendency display unusual behaviors, such as pooping.

The separation anxiety your dog might feel if they haven’t seen you in a while or if they are sleeping far away from you may lead them to poop at night.

Novel surroundings or feelings of insecurity may also contribute to their anxiety. Most dog owners know that dogs are reluctant to defecate unless they feel comfortable and secure.

If there hasn’t been any change in your dog’s routine, surroundings, or food, then it is a high possibility that your dog is suffering from a health-related problem. As a dog parent, you should always lookout for any changes in your dog’s health.

If you notice any sudden changes in their stool behavior in terms of frequency, appearance, or time, then it’s a red flag. Some of the specific health-related concerns are as follows:

If your dog had recently gone through an orthopedic surgery, then chances are that they aren’t consistent with the pooping. This means they are pooping at unusual hours, sometimes in the middle of the night.

Furthermore, if your dog is suffering from arthritis, then they will try to hold their poop as long as they can to avoid pain in their joints.

Most adult healthy dogs can hold their poop for at least 8 hours. However, once that period lapses, they might have to poop immediately.

According to dog experts, gastrointestinal problems refer to inflammation in the stomach and intestines. This situation leads to abdominal pain, vomiting, diarrhea, and other illnesses.

3. Eating too Late or Early

A quick google search about dogs’ digestive mechanisms will tell you that ideally, their bowel movement starts only after 15-30 minutes of the meal. So when they eat late, there is a high possibility that they might want to poop in the middle of the night.

Lack of physical movement among dogs after having a meal is yet another factor that can trigger pooping at unusual hours.

Furthermore, it is also possible that your dog is eating their meal several hours before bedtime, and the moment you sleep, they have to poop.

If your dog is going through the house training phase, then there is a high chance that they are still getting used to their schedule.

During the initial stages of house training, dogs might forget their scheduled time to poop and hence have to wake up in the middle of the night.

Aging affects dogs the same way it affects humans. If you have a puppy or a senior dog at home, chances are they are finding it challenging to stick with their potty schedule.

The case with the puppies is that it’s different for them to control bladder and bowel movement.

For senior dogs, the same applies but it’s due to medical conditions such as arthritis or canine cognitive dysfunction.

As dogs get old, their bathroom visits get frequent and irregular.

If your dog is giving you signals that they want to poop, but you miss them, then they might have to poop in the middle of the night. It happens when dog parents feed their dogs and forget to follow up on their dog before bedtime.

Your dog might be pooping at night because they are stressed out. Stress leads to changes in a dog’s behavior. Some of the major contributors to your dog’s stress could be changes in surroundings, loud noises, medical conditions, etc.

It is a well-known fact that dogs don’t like changes in their surroundings. Novel surroundings make them anxious and stressed out.

So if you have recently moved into a new house, and your dog has started to poop in the middle of the night, you can very well connect the dots.

Fear of punishment is a serious problem that might affect your dog’s potty behavior. Never punish a dog for an “accident,” as they might associate pooping with punishment, and won’t tell you the next time they have to go.

Furthermore, they will choose the post-bedtime time to poop when you won’t be around them.

It is a likely possibility that your dog is obsessed with you and needs your constant attention. You might be surprised to know the lengths they would go to grab your attention.

So, if your dog is suddenly waking you up in the middle of the night because they have to poop, and there are no changes in their routine or health, chances are they just want to spend some extra time with you and get those additional pets and treats.

Shyness is a prevalent personality trait among dogs. If your dog is too shy to poop when you are around or when a lot is going on in the surroundings, they might prefer nighttime pooping when they are alone.

Fun Fact: This might come as a shock to you, but dogs have poop personalities. Yes, you read it right. Every dog has its own poop personality. One of those personalities is the “Shy Baby.” Dog’s showing such personality is also known as The Cautious Canine, as they seem nervous and almost apologetic while they are pooping.

If your dog gets distracted easily, chances are they won’t be able to poop whenever you take them outside. Hence, the only possible time when they can poop without getting distracted is nighttime.

Is Your Dog Pooping At Night? Here’s How To Deal With It.

The best way to deal with an anxious dog is to make them feel comfortable and calm their nerves. Your dog is probably anxious because of some noise or your absence. Spend some time with them regularly to reduce their anxiety and stress.

Ruling out any physical or medical illness makes your job easy to detect the actual cause of the nighttime potty habit. However, if your dog is suffering from a certain illness, take them to your vet immediately.

Continuing the point discussed above, if your dog is ill, or you aren’t sure about what’s the reason behind why your dog’s pooping at nighttime, the best course of action is to book a trip to the vet.

Maintain a strict feeding routine for your dog, no matter how much they try to manipulate you or give you that innocent look. Initially, they might not take it well, but believe me, it would be beneficial for both of you in the long run.

Feeding your dog anything other than their regular meal is like writing an open invitation to potty problems.

Leaving the food out for your dog all day long is known as free-feeding. You should avoid this at all costs, as your dog might save some food for late-night snacks, and then it might lead to a potty call at an unusual hour.

Additionally, leaving food out is not recommended as it causes irregular food intake among dogs.

You can add digestive boosters to your dog’s food to increase their digestion functionality. Using natural boosters such as eggshells or pumpkins, or probiotics will boost their digestive mechanism.

A regular walk with your dog after dinner might do wonders for their stomach. Doing some form of physical activity after having a meal smoothens the bowel movement and boosts the digestion process.

Eventually, your dog will start pooping while on the walk and sparing you from having to wake up in the middle of the night.

Q. Is There A Way To Make My Dog Poop Faster?

Q. When Should A Dog Have His Last Meal Of The Day?

Experts suggest that a dog’s last meal should be somewhere around 5 p.m. so that he can easily digest the food and eliminate it one last time before bedtime.

To give you a summary of what we have learned so far, here are the key highlights of this article. Some of the factors that may cause your dog to poop at night include medical conditions, physical illness, lack of exercise, and timing of food intake.

You can control their behavior by training them, giving them digestive boosters, and if there is an underlying medical condition, consult the vet as soon as possible.

Taking your dog for a walk after their final meal and maintaining a feeding schedule for them is recommended. Never use punishment as a means to train them, as it would only discourage them to poop around you.

We hope this article helps you and your dog in the best possible way.