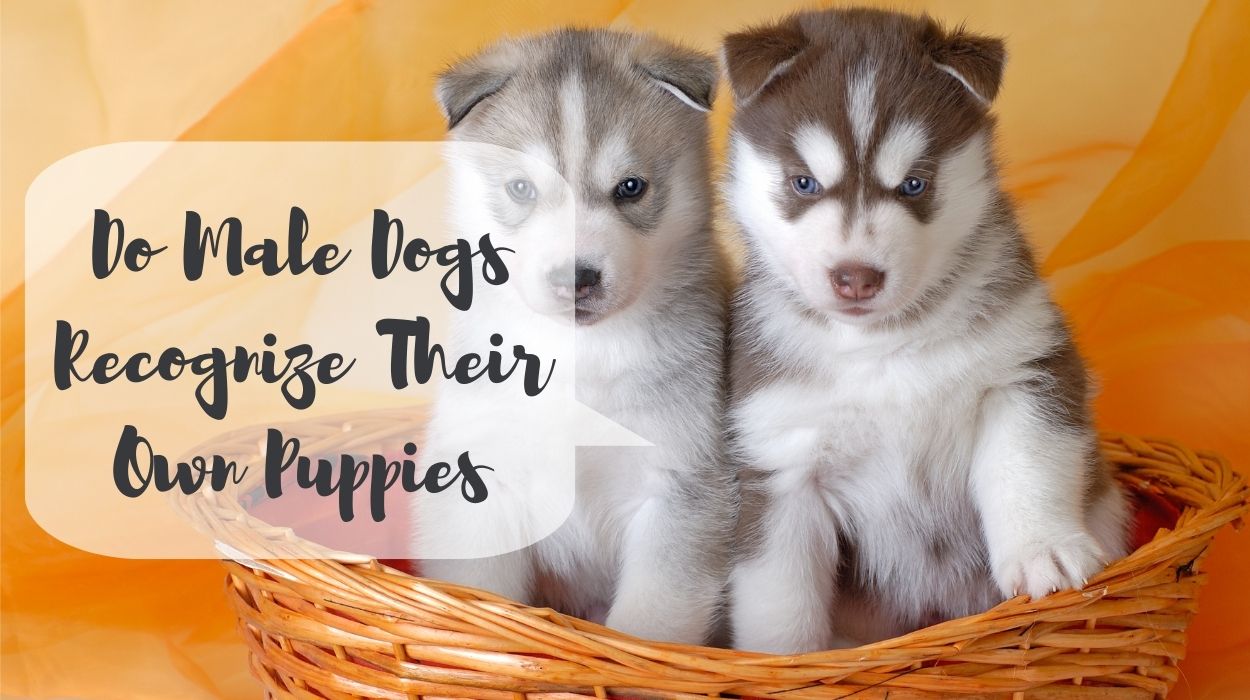 A mother dog always cares for his litter. She feeds them, keeps them safe, and plays with them. But, what about the father dog?

Do father dogs know who their puppies are?

Are puppies close to their father?

To get rid of such questions you have to read out article. In this, we have solved a lot of questions.

You will learn whether male dogs have father feelings or not, how to introduce puppies to their father, and many more.

Do Father Dogs Recognize Their Own Puppies

Generally, the answer is no. Male dogs do not recognize their puppies. They are not aware of which puppy is theirs. It is because they have got a chance to breed with many females in a time.

Although it is challenging to say that they cannot recognize their puppy because sometimes adult dogs can detect their kids. And they treat with care and patience.

But, still, the chances are less, and considering dogs know their litter is a bit difficult.

As you know, dogs are a pack of animals, so when a newborn puppy gets added to their team, male dogs consider them just as a new member as a new playmate. As a result, there is no father feeling.

Do you think male dogs do not recognize their puppies but have paternal instincts? Let’s see in the next section.

Do male dogs have paternal instincts?

The direct answer is no. Male dogs do not have paternal instincts. They have general instincts it is not related to parental vibes.

Male dogs will distinguish them, and they will not consider them as adult dogs. Instead, they will keep them as a pack of members. They will take care of them protect them but not as a father figure.

Wild wolves show parental behavior; however, domestic dogs do not do this. It is because of human interruption. By interruption, I mean humans have started breeding dogs, and due to that, male dogs do not have a close connection with their children.

Male dogs have no bond with their littermaid because they are kept far from their father when puppies are born.

For instance, for hunting, puppies need their father, but they don’t need to do hunting because of breeding. They get their food whenever they require it.

Moreover, they’re also not required to educate puppies about their place in the pack order. Humans are in charge of doing these tasks.

When puppies are born, they live with their mother. Female dogs take care of them, train them, protect them, that’s why female dogs have maternal instincts, but male dogs don’t.

As male dogs are not active in puppies’ lives even after breeding, they may not be nice to them.

They get aggressive, and you can’t predict how they will react with their puppy, so it is better to always introduce the father dog to their puppies beforehand with caution.

As you know already, male dogs don’t really recognize their offspring. They don’t have paternal instincts.

Female dogs take care of their offspring. Right from raising to feeding, every job is undertaken by the mother dog.

So, male dogs don’t have a parental feeling; they do not know them. They can rarely become a good parent. But, if we generalize it, the answer is no.

Male dogs are not good parents. They may even misbehave when they meet them at first.

One more reason male dogs aren’t good parents is because of us humans. Humans and pet dogs have had a close bond for a very long time now. Dogs are affectionate towards their owner more than their other family member.

So, there is a high chance that dogs may not have a close bond with each other if you compare them with humans.

If you wonder why male dogs play and have fun with the puppies, it can be because they live in the same space, and owners force them to build harmony and peace.

As male dogs don’t have father feelings towards their puppy, you must wonder what will happen if you introduce male dogs with their offspring, right? Well, let’s catch that in the next section.

What to expect when a male dog is introduced to his puppies?

The intensity of meeting and greeting can go from affection to aggression. It is a bit challenging to predict how a father dog will react when you introduce them to their puppies.

It is because every individual is different. Some male dogs may be normal won’t have any hard feelings, and others may get jealous and may become angry.

So, wherever you initial a meeting session between male dog and their puppies, it is vital that you be extra careful and prepared to protect them.

Because in case a male dog goes violent, you have to be alert and ready to control the situation. Moreover, accurately predicting the reaction when introduced to their pups will vary by breed and household context.

If a dog already has a loving and caring nature, it is only possible. They may just sense the puppies’ vulnerability and take appropriate action.

Remember that love and care come only because of affectionate nature and not parental instinct.

Why do father dogs attack their puppies?

Male dogs get jealous. Maybe because of the owner. Owner showering more love to their new puppy can create jealousy in male dogs.

Moreover, female dogs also pay extra attention to their kids, obviously because of motherhood. As a result, the male dog may become violent and can attack puppies.

Should father dogs be kept away from little puppies?

You don’t know how male dogs will react when the newborn puppy comes near them. It is difficult to predict their reflex. Therefore, it is vital to keep newborn puppies away from fathers.

Once puppies are a month old, they are strong and not fragile. So, if a father dog attacks them, they won’t die. It is advised to wait until litter cross one month before introducing them to their father.

But, it is obvious you have to take care of safety measures, and in case the puppies’ father starts benign aggressive, you take the puppy out of his reach.

How do wolves father their pups?

Wolves are pack animals, and therefore, they have a close bond within the family. Male and female wolf has a prolonged bond. The father wolf plays a vital role in the life of pup wolves.

Generally, a female wolf gives birth to four or seven pups in season. So, the father wolf takes extra care of their kid.

He acts as a strong shield around the den and takes care of the entire territory as many enemies can attack them and kill their pup.

Male wolves also take care of feeding their pup. They teach them survival, hunting, and everything. They enjoy with them, protect them, and play an essential father role in their life.

Do male dogs get sad when you take their puppies?

If your dog is affectionate, loves the puppy, and plays with him, he may get sad when you keep him away.

As a result, they are okay even if you keep them away from their puppy.

Male dogs don’t recognize their puppies because of human interference and because they mate multiple dogs at a time.

There is parental instinct, and even if they are good to them, it is because they consider them a new playing member.

Moreover, it is vital always to take extra care when you introduce puppies to their father as they can attack them.

If you learned a new thing from this article, share it with other pet owners.