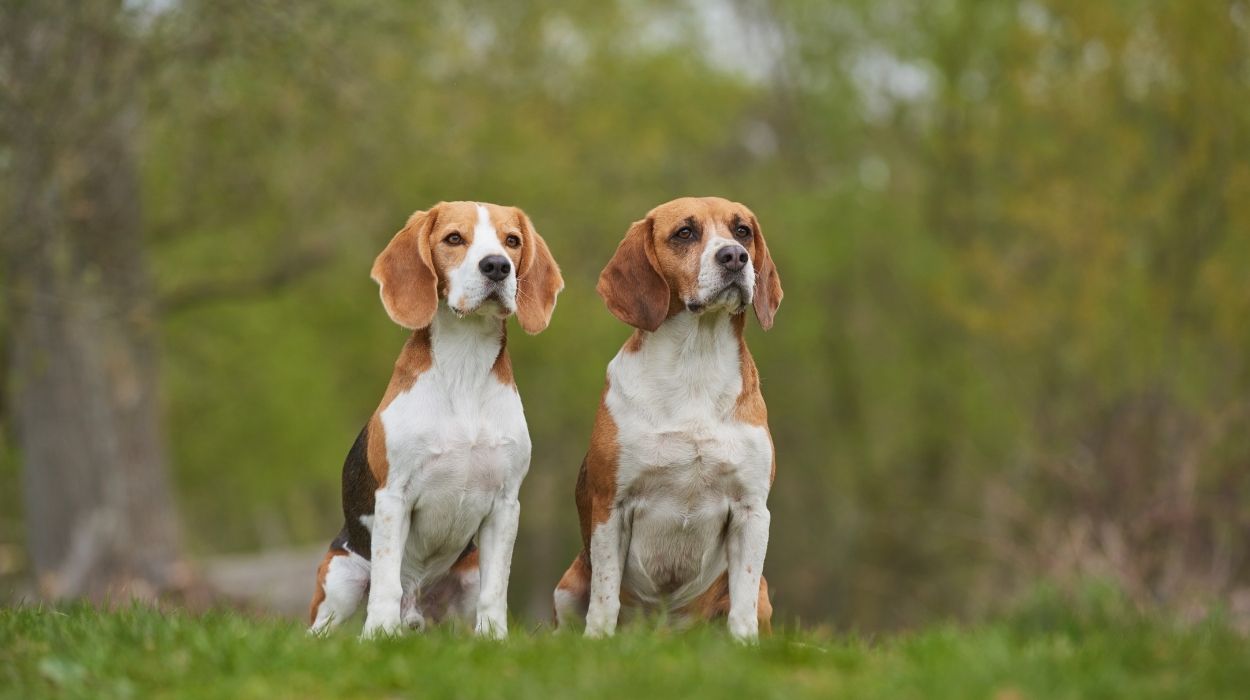 Two Beagles can live together because they are social dogs that love company. Since they lived in packs, they did everything with their pack members. So, having another Beagle will help create a pack-like environment at home.

Moreover, the Beagles were trained to do almost everything together. They hunt, eat, and sleep together. This means that they have an excellent understanding of each other. In addition to this, they also have a good grasp of socialization.

So, adding another Beagle to your home will be a great choice. However, as owners, you have to realize that it will not reduce the work you have to put on them.

This article will help you decide whether you should bring another beagle. 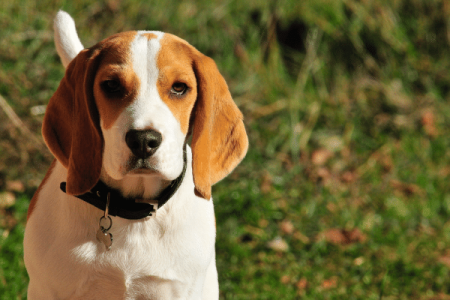 Before you consider bringing another furry friend home, you should take another look at Beagle’s characteristics and physical aspects:

Beagles are also good with family and children. They require daily exercise and a significant amount of mental stimulation.

Reasons You Should Get Another Beagle 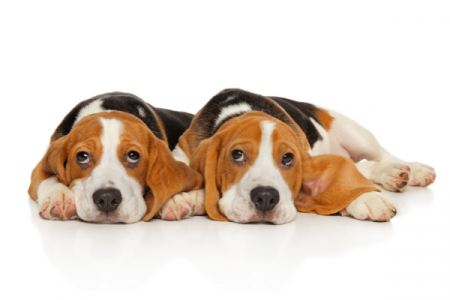 If your family cannot give them the company they usually get from their pack, your Beagle might get bored and frustrated quickly. Like we mentioned earlier, they thrived in packs. This trait probably lingered even after they became domesticated. So, they crave companionship.

It’s why when you leave them alone for a long time, they become prone to separation anxiety.

Another dog might help uplift your dog’s mood. The company of another dog will drive the loneliness away. And, the stress on you will lessen a little.

Beagles love to play. Having a buddy to play with will keep them occupied and happy.

If you are a busy owner and you only get a few scraps of time within a day, then your Beagle might feel neglected. While another Beagle might distract them, you cannot subject them both to the same feeling of neglect.

Even after giving them daily exercise and still showing signs of frustration and boredom, they might require a change. Bringing in another family member will prevent this. Now, they have an additional member to play, cuddle, eat and sleep with.

Your dog can release all the pent up energy when they are playing with their companion. There are a few things you can look out for if you need to decide whether they need a companion:

An increased amount of sleep

In the end, getting another Beagle might also help lower the wild enthusiasm Beagles tend to have, or it might amp it up. Therefore, both must be socialized.

Dogs are also better company for each other than humans. Your dog might relate to other dogs more often compared to humans. This might be because dogs inherently enjoy each other’s company: they play, bond, sleep and eat together.

If you pair a younger dog to a mature dog, the latter might remember their youth. This can bring back happiness and playfulness into their lives.

You might notice if you visit a shelter, dogs seem to do great in groups. They are more ease and less stressed.

Can Two Male Beagles Live Together? 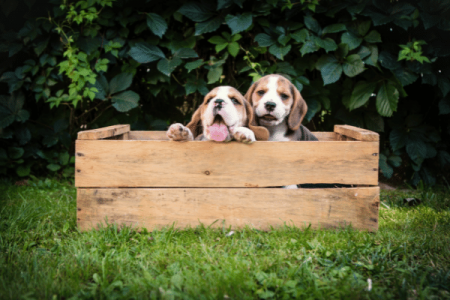 Many say that two male Beagles have fewer problems living together. While that may be true, it also depends on the dog’s personality. Not all Beagles will have the same tolerance level.

However, two male beagles get along well and can live peacefully together.

Their natural pack instincts make them ideal for multiple companions. Gender should be less of a problem between male beagles because both don’t try to prove their dominance often.

Two male Beagles can indeed thrive together. Just make sure both are appropriately disciplined and adequately socialized.

Can Two Female Beagles Live Together? 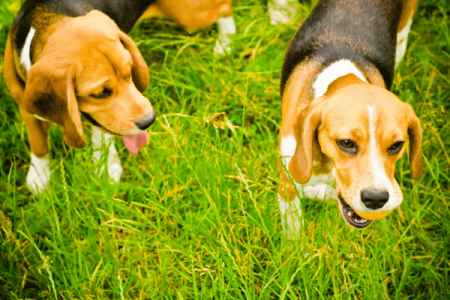 Female Beagles, it seems, tend to get a little territorial about their owners and things. They become competitive when another female beagle is present. So, they fight with each other to display their dominance over one another.

However, to answer the question, they can live together provided that they have proper socialization and training.

As Beagles are friendly and social, two female bagels can get along with training.

On the other hand, if the females are mother and daughter, then their bond will be stronger.

It is best to introduce them when they are both puppies. It will be extra helpful if they are from the same litter.

Reasons Why Two Beagles Don’t Get Along Sometimes 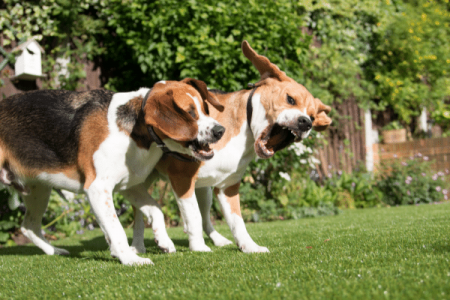 The reason why your Beagles might not get along has less to do with their gender and more with their individual natures.

Beagles are social creatures, so they love living with other beings. They are playful, and if they have their playmate, they will be ecstatic.

The fight between two beagles usually depends on their distinctive personalities. There are a few reasons why they might not get along:

To assert dominance: If both are dominant, then their personalities will clash. They will try to fight to prove who is more dominant.

Insecurity: If one dog feels insecure because of the other’s presence, they might be uncertain about their things. Their possessiveness makes them bark at the other to protect their items.

Competitiveness: If even one of your dogs isn’t socialized correctly, they can become competitive. They might fight over who gets to eat first, who sleeps more, who gets to spend more time with you and so on. This is not only difficult for you but also hard for the other dog.

How To Integrate A Second Beagle 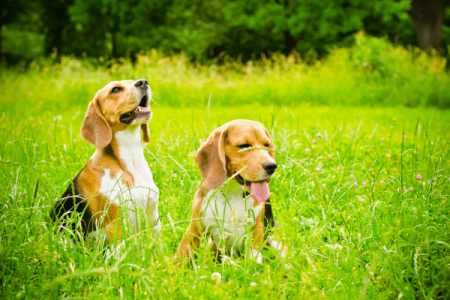 Once you decide to bring another Beagle into your lives, the most crucial part arrives- Introduction.

Introducing the new Beagle to the old one has to be perfect because otherwise, their unfriendliness towards each other might increase.

So, you need to integrate the new Beagle correctly so that both your dogs will have a friend for their lifetime. It is up to you to make sure they have a peaceful and amicable companionship.

Here are the things you can do to make their first meeting the best meeting:

Let both the dogs meet on neutral ground. It can be a playground, a dog park or someone’s backyard. Make sure the place is unfamiliar to both of them. This is to ensure that neither of them feels a threat to their familiar places.

Ask a third person to bring the new puppy. Please make sure you are relaxed, so neither of them feels any trepidation.

Let them socialize and leave them to do their own thing. Let them sniff each other and notice how they react.

If one of them is reluctant, do not force them.

Give them time to become comfortable around each other and the new situation.

Once they start interacting, even a little, reward your Beagle. Your positive reaction will encourage them to continue.

Try to make them meet like this a few times. Don’t bring the new one home just yet. This will help reassure your older Beagle that their territory isn’t suddenly taken away.

Take it slow and let your dog sniff something that has the puppy’s event.

Once your dog is familiarized with the scent, you can bring the puppy home.

Give them both time to get along. Establishing yourself as their alpha will the process along.

If they are in crates, make sure they have separate ones and do not leave them unsupervised in the beginning.

The overall verdict is that another Beagle added to your Beagle will make a great combo. Beagles are friendly and love company. They also love making friends and getting along well with other dogs.

It will be great for them to have someone to play with if your dog is left alone for a long time. Moreover, your dog will be less stressed and more playful.

There are some situations where they might not get along, but it does not depend on the gender. It has more to do with their possessiveness.

Make sure they hit it off in their first meeting by following the steps we listed above. If not, give them time.

Let us know in the comments how it went!