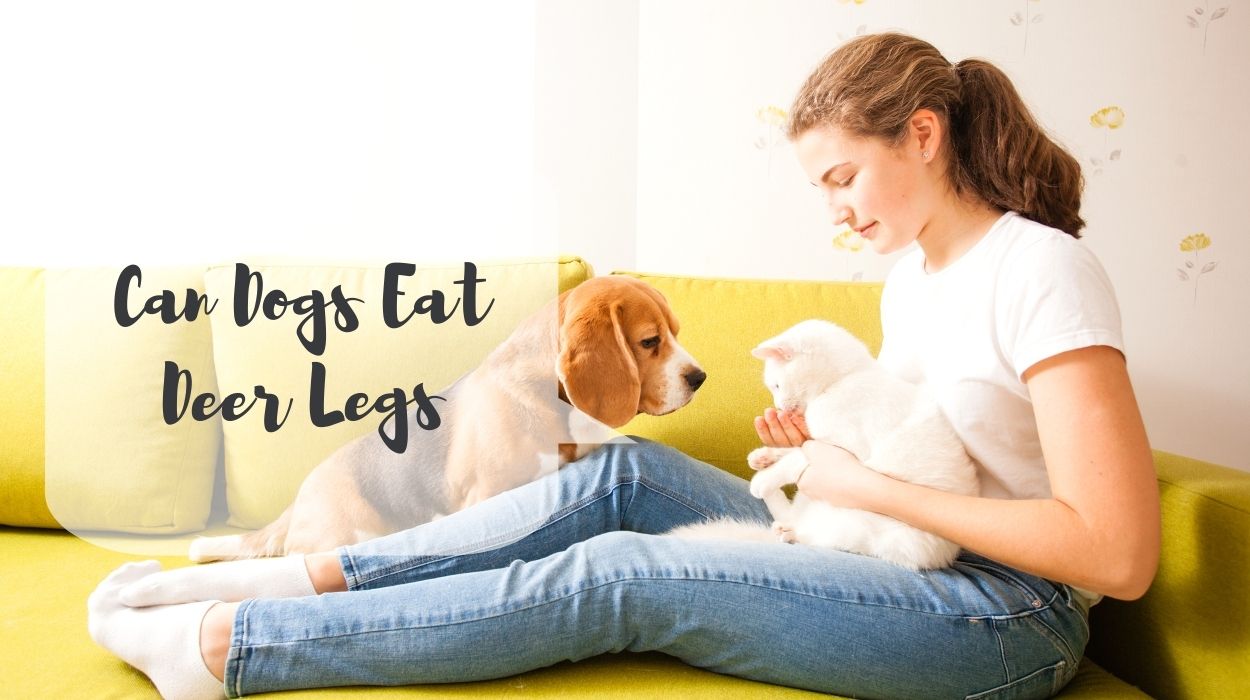 If you own a dog and are planning to bring a cat or visa-versa, then the first thing that comes to your mind is whether they will get along or not. This concern grows when you own a Beagle, as they are hunting dogs and have the instinct to chase.

In this article, we will address this concern and tell you whether bringing a Beagle and a cat together will work or not. Along with that, if you already own them, we will provide you with a comprehensive guide to raising them together.

Do Beagles And Cats Get Along? If Yes, Then Why? 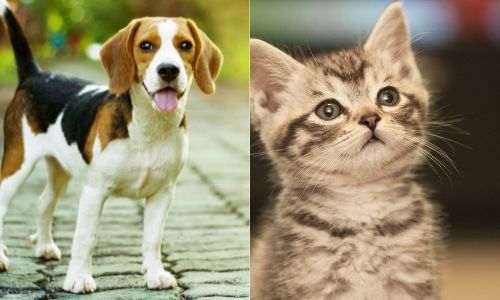 We believe that Beagles and cats make terrific mates for various reasons. Though it may take some time due to the Beagle’s temperament, your Beagle and get will get along pretty well after a brief period.

Beagles have some personality features that make them ideal for cats. That is why we investigate the characteristics of these dogs and why they are more inclined to regard cats as friends rather than predators.

They were bred to hunt in packs.

The first and best thing about a beagle is an amicable and peaceful dog breed. According to the AKC, Beagle is considered the best dog breed if you have a child or another dog at your home and are merry and curious.

When you read about the beagles in the past, you will learn that they were bred to hunt small animals. Because beagles were a small dog breed, they usually moved in packs, so they were accustomed to being around other dogs simultaneously.

There is already evidence of the Beagle being a pack animal in the past, and we can conclude that they will get along well with cats or other pets compared to other dog breeds.

Beagles are more of a tracking dogs than hunting dogs.

If you pick anyone and ask them if the Beagle is an aggressive dog or not, then their answer will always be in favor of the Beagle being a calm and playful breed. Because of their charming demeanor, Beagles are one of the most incredible dogs to have near cats, as per AKC.

Beagles are always kind towards other animals and children. This breed is most curious and loving, they are always up to some mischief, and even when hunting, they rarely attack any other animals.

Numerous specialists advise against mixing cats and hunting dog breeds. Beagles were designed to be hunting buddies, after all. However, they tracked dogs who used their extraordinary noses to chase small animals.

In old times beagles were also used to assist in removing wild animals. Beagles will go out into the field and let out a howl as soon as they see the animal. It is known as “beagling” in the hunting world. It could be the most environmentally friendly method of hunting.

These breeds are obedient and easy to train.

Beagles have a poor track record regarding obedience and working intelligence. However, this does not imply that they are stupid or disobedient dogs. Beagles can be trained well, but only if the correct motivators are used.

Like the Border Collie, these dogs don’t just “work” for the sake of working. Instead, they rely on their noses and curious dispositions to guide them.

However, as long as you can identify their motivators, teaching your Beagle to get along with a cat will be relatively simple. As positive support, you can give your Beagle their favorite treats, toys, or playtime!

6 Step Guide For Raising Your Beagle And Cat Together 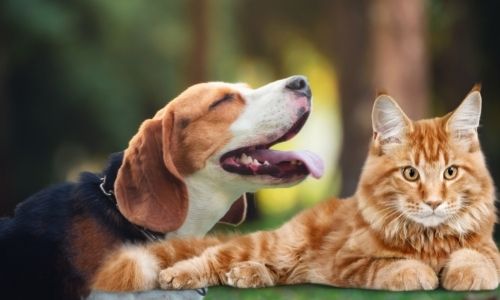 Now that you’ve decided to bring a cat into your home, there are a few things you should do to ensure that your cat and your Beagle get along. Though you won’t achieve this on the first go, you will eventually get there.

Initially, resist the urge to put your Beagle and cat in the same room. It may take some time, and a few simple steps to get your Beagle used to a new feline friend. Until you’ve completed the instructions listed below, keep both your pets in separate rooms.

1. Make them aware of each other’s odors

Beagles have developed a high sense of smell due to their evolution as hunting and tracking dogs. Cats, like dogs, have a powerful sense of smell. Domestic cats have two times as many smell receptors as humans.

Though cats’ sense of smell is not as strong as dogs’, they still have a decent understanding of discretion smells. Now that you know that both of your pets have a strong sense of smell, you should familiarise each animal with the scent of the other. To start, rub a cloth or towel over each animal before placing the towels in the living space of the other animal.

Tuck the towel into the area where your Beagle and cat like to sleep if conceivable. As your pet will smell the other pet’s scent while sleeping, they will become more familiar and, eventually, comfortable with each other’s scent.

2. Place them on opposite sides of a door and feed them together

Put your Beagle’s and cat’s food on separate sides of a locked door when you first start feeding them. It will be helpful for them as they can scent each other again and enjoy a meal without feeling threatened by each other’s presence.

Having started to feed the dog and cat around the same time is never a good idea. Despite being relatively calm around the house, either animal can be aggressive with food when eating.

Dogs and cats are naturally curious about each other’s food. However, because they both belong to different species of the animal kingdom, their nutritional requirements differ. Another thing we’d like to suggest is that you don’t let your Beagle eat too much of your cat’s food.

3. Allow them to meet at a place which is comfortable for both of them

Allow your animals to meet in a neutral location after a week of training programs to each other’s odors. It makes no difference which pet came first; all of your pets will regard their living space as their territory.

While dogs are less likely to exhibit this behavior, cats are more likely to show you that they have marked their territory.

To help your Beagle relax:

Allow your Beagle to approach the cat if they feel comfortable. Train your cat with verbal cues and keep the visits between them up to a certain level initially. Also, make sure that before you bring a cat to your house, you have given proper command and training to them.

It will help you keep your dog in control if he gets too excited or aggressive sometimes.

4. Feed both of your pets together with you

Try to place your pets’ food bowls on opposite ends of the same room after a few days or weeks of face-to-face meetings. Ensure that they are fed simultaneously and eat at the same time. It will strengthen the pack mentality.

Feeding one pet before the other, similar to training two dogs, can signal that the other pet is dominant and has more importance than the other, which may not appear to be the case well for the other.

Another consideration is that if you feed your cat and dog at the same time, the more assertive animal may devour the meal of the less aggressive animal.

5. Only leave them alone for brief periods.

The point is that you should allow your cat and Beagle to be alone in a room for a brief period if you’re satisfied that they’ve become comfortable with each other. The first few times you do this, try to check in every ten to fifteen minutes.

Your pets, especially the Beagle, may behave differently when you’re not around. However, the only way to find out is to give them the impression that they are alone without your watch. Make sure that your cat has an exit gateway, which is usually an accessible spot high enough for the Beagle not to reach.

If you’re curious to know how you’ll learn how your pet is behaving while you’re away, you can get a pet camera for monitoring purposes.

When is the best time to introduce beagles and cats?

Many pet parents have this question in their mind: when is the best time to introduce their pets to each other? Well, it’s always better to train your pet when they are young. It would be best to teach your puppy and kitten when they are small and easy to handle.

Mature animals, such as a large Beagle, can be dangerous to smaller animals; for example, a tiny kitten could be injured by a grown Beagle. But if your Beagle is grown up, introducing an older Beagle to an older cat is the next best option. We recommend this because their energy levels are more likely to coincide.

The same is true for cats; a puppy is full of energy and wants to play all the time. An elderly cat, on the other hand, will be unable to match your puppy’s energy and playfulness.

Is my Beagle going to hurt my cat?

Beagles are pack animals with a hunting instinct. As a result, your Beagle may chase your cat, but playfully. However, if you have a little cat and a giant Beagle, he may harm your cat accidentally. Regardless of the situation, it is always a good idea to teach your Beagle not to chase your cat.

Will my Beagle eat the cat’s litter?

Beagles are a curious and notorious dog breed and have a habit of sniffing and consuming the poop of other animals. But, the primary concern here is that cat litter is very harmful for many reasons.

Hence, it’s critical to keep your cat’s litter box out of your Beagle’s reach. If your dog consumes cat litter accidentally, take him to the vet immediately.

Is it possible for a cat to harm a dog?

Cats can also cause harm to dogs, but this is a rare occurrence. Most of the time, the cat is merely attempting to flee from the dog. As you might assume, the best way to keep your pets from fighting is to prevent them from fighting in the first place.

In this circumstance, prevention is the optimum solution.

Apart from Beagle, which dog breeds get along nicely with cats?

Yes, beagles are not the only dog breed that gets along well with other dogs. Here is a list of dog breeds that can coexist peacefully with your cat, approved by the AKC.

We’ve arrived at the end, and we’d like to conclude that, while your Beagle and your cat may come from different parts of the animal kingdom, that doesn’t mean they won’t get along.

Every animal is distinct in its way. However, if you follow the steps outlined above, you should have a good chance of them coexisting in your home.

Even if you follow these steps, you may encounter some unexpected encounters with your pets. Try to keep your pets apart and start over again while keeping the past mistakes in mind during those times.